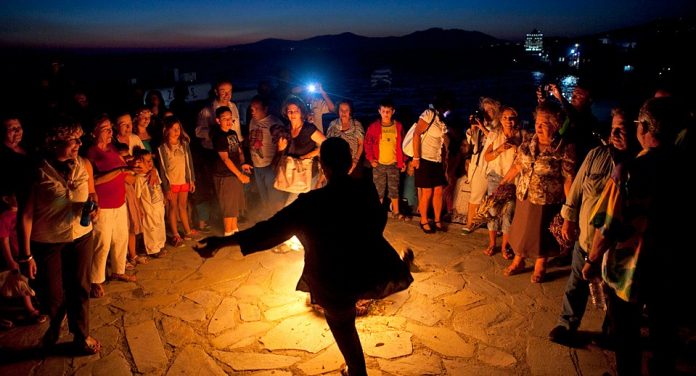 Stricter inspections and fines were announced Friday by Deputy Civil Protection Minister Nikos Hardalias as part of the effort to crack down on parties that risk becoming coronavirus super-spreading events.

To this end, he announced the deployment of special teams, as epidemiological indicators remain high and the wall of immunity through vaccinations is still far away.

“Dispersal has not been contained yet, even though there is a recession,” he stressed and referred to the new interactive epidemiological map which showed that, at the moment, there are 28 orange regions in Greece and no red ones.

Mykonos Police one night broke up a party with up to 500 guests, one day after authorities imposed emergency restriction measures.

The Mykonos police force was previously enlarged with a total of 100 officers from the Attica region in order to maintain proper restriction protocol. Officials at the ELAS also informed the press that there are a number of plainclothes policemen on Mykonos as well to handle problems that might occur as a result of the imposition of the stricter measures.

In another instance the same month, a group of British tourists felt “stupid” after they were diagnosed with coronavirus from a massive boat party on the island of Kakynthos.

Exclusive footage emerged from the Daily Mail of hundreds of British tourists crowded together on a boat, ignoring social distancing measures.

“It’s really bad out there. Something like this could start a second wave of coronavirus. I don’t think people should go,” Jamie Raine, who tested positive for coronavirus, told Mail Online.

“I guess the message is, don’t go on holiday and if you have to, have a more chilled out holiday with no night clubs.”