Palm Sunday: What is it and why do Greeks celebrate it? 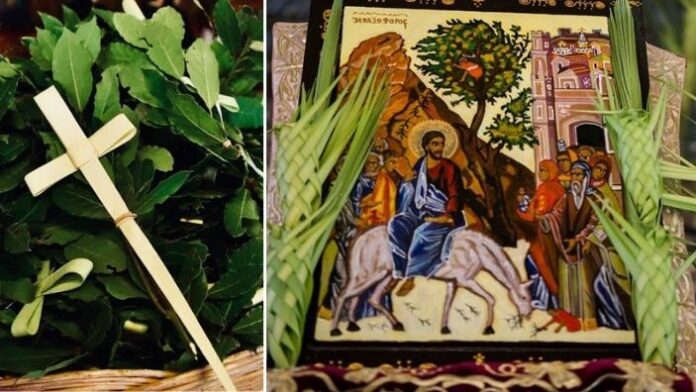 Palm Sunday (Κυριακή των Βαϊων), also known as the Triumphal Entry, is one of the Orthodox Church’s Great Feasts. It is held on the Sunday before Pascha (Πάσχα). On this day, the Church celebrates Jesus’ arrival into Jerusalem in the days before the Jewish Passover.

The biblical description of Palm Sunday is mentioned in all four Gospels (Mark 11:1-10 Matthew 21:1-11; Luke 19:28-38; and John 12:12-18). Palm Sunday celebrates Jesus’ triumphal entrance into Jerusalem on the back of a young donkey after the miracle of raising Lazarus from the dead.

The people of Jerusalem welcomed Jesus by waving palm branches and praising him. Hundreds of people yelled, “Hosanna to David’s Son! Blessed is he who comes in the Lord’s name! In the highest heaven, Hosanna!”.

Jesus rode in on a donkey, directly fulfilling the Old Testament prophecy of Zech. 9:9. “Rejoice greatly, O daughter of Zion! Shout aloud, O daughter of Jerusalem! Behold, your king is coming to you; righteous and having salvation is he, humble and mounted on a donkey, on a colt, the foal of a donkey.” Zech. 9:9

It was popular in Biblical times for kings or important people to appear in a procession sitting on a donkey as it represented peace, so those who rode them demonstrated that they came with peaceful intentions.  This demonstration was a reminder that Jesus is the Prince of Peace.

Although it is still Sarakosti (40 days of Lent), Greeks around the world eat fish on Palm Sunday. The Greek Orthodox Church nevertheless permits the consumption of fish, oil, and wine, but not dairy products, eggs, chicken, or red meat.

Usually, the classic dish that Greek Orthodox people consume is Bakaliaros with skordalia, a dish that contains fried cod fillet with a creamy garlic mash.

On this Sunday, in addition to the Divine Liturgy, the Church observes the Blessing and Distribution of the Palms. A basket containing the woven palms shaped like crosses is placed on a table in front of the icon of the Lord, which is on the Iconostasion.

The palm tree branches represent Christ’s triumph over the devil and death. People who attended the liturgy can take one and put it in their homes near the icon of Jesus.