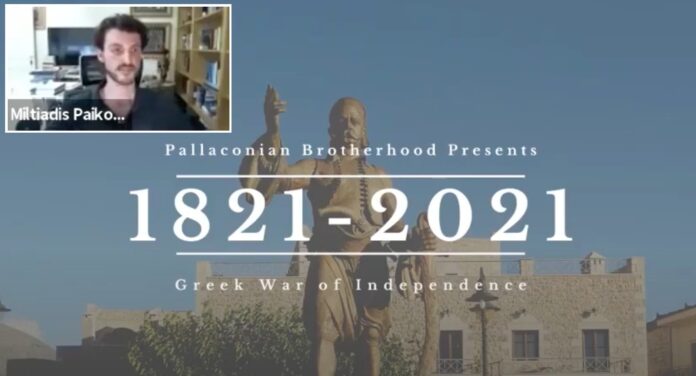 As the first in a series of digital webinars commemorating the bicentennial (1821 – 2021) of the Greek War of Independence, the Pallaconian Brotherhood invited Miltiadis Paikopoulos to give a lecture on the 17th of March 2021 titled ‘Laconians in the Epanastasi‘.

There was a special significance with the lecture, because on the 17th of March 200 years ago, the Laconians assembled at Areopolis in the Mani peninsula, at the behest of Petrobey Mavromichalis and declared war on the Ottoman Turks.

“As the first lecture in the series, I was aware of the significance that it would hold, and whilst I can’t comment on my own lecture, the feedback and support from the community was positive, and for that I am grateful,” Paikopoulos said to The Greek Herald.

“We were joined by around 50 live viewers across platforms, and the lecture is on track to hit 1000 views! It is truly beautiful that I am able to in some way share the struggles of the Laconians, which were key to the independence of the Greek people.”

Miltiadis’ lecture aims to be accessible for newcomers to Greek history, but also interesting and exciting for those familiar with the subject.

“It was my privelege and honour to discuss the contributions of my ancestors, the Laconians, to our Greek national effort, especially on the 17th of March, when the Laconians declared independence at Areopolis in Mani 200 years ago,” Paikopoulos added.

“From 1453 – 1821, we Laconians were at the forefront of the liberation movement and made many attempts prototypical of 1821. Unfortunately, this history is not widely discussed or promoted, so my greatest wish is that what I have discussed in this lecture helps make it accessible to the widest audience possible”

He has served as the Pallaconian Youth President from 2018 and has an interest in Classical Sparta, the Hellenistic East, Byzantine Greek and the history of modern Greece from the War of Independence to the 20th C.

Recently, he has also published his first book ἔργᾰ ἀκμαῖα (2021), which is a collection made up of his select undergraduate essays, covering many topics from his interests, as varied as Aristoteleian Ideology, Spartan hegemony and the 1974 invasion of Cyprus.

The Pallaconian Brotherhood thanked Miltiadis for presenting the lecture on their Laconian ancestors, bringing attention and provoking thought on a much-deserving topic.