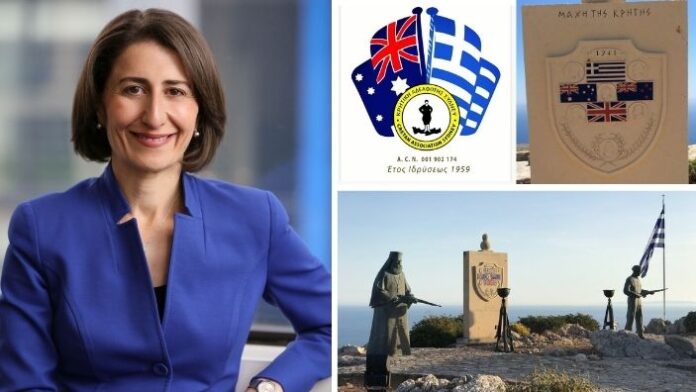 NSW Premier Gladys Berejiklian has sent her best wishes to the Cretan Association of Sydney and New South Wales as they commemorate the 80th anniversary of the Battle of Crete.

The Battle of Crete began on the morning of 20 May 1941, when Nazi Germany began an airborne invasion of Crete. Allied forces, including Australian, British, New Zealand and Greek troops, fought in the battle. Over 12 days, there were approximately 23,000 total casualties.

“The battle was one of the most dramatic of World War II, in which Australian and New Zealand solders fought alongside Cretan, Greek and British troops to defend the island of Crete from a sustained airborne assault,” Ms Berejiklian said in her statement.

“The bonds forged between Australia, New Zealand and Greece in the crucible of this fight for freedom continue to this day and it is heart-warming to see Australians of Cretan heritage honour the courage and sacrifices of the ANZAC troops and their forebears.”

The NSW Premier also commended the Cretan Association of Sydney and NSW and the Australian Cretan Community for “supporting our multicultural society and enhance our ties with Greece.”

The Cretan Association of Sydney and NSW will be holding a ‘Battle of Crete Dinner Dance’ on the 10th of April to commemorate this historic landmark. The event will feature the lyra and vocal performance of Sifi Tsourdalakis and will be held at the Croatian Club in Punchbowl.