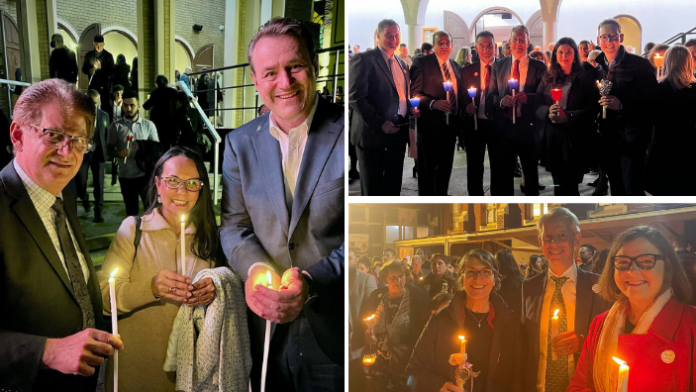 Federal Labor Leader, Anthony Albanese, might be in isolation due to COVID-19 but that didn’t stop senior members of his Shadow Ministry from attending Anastasi services across Australia on Saturday night.

“It was truly wonderful to attend mass on Saturday evening in Kogarah,” Ms Burney said after the service.

“It is one my great joys as an MP to represent such a vibrant and diverse community, and that was in full display over Orthodox Easter.”

“I was honoured to join my Labor Party colleagues across the country on Saturday evening as we joined the Greek community in celebrating the Resurrection,” Ms Vamvakinou said.

“It’s a testament to the long standing relationship between Greek Australians and the Australian Labor Party.”

“Thank you Father Adamakis for inviting Carina Garland, Labor’s candidate for Chisholm, and I to join your congregation for the celebration of  Easter at St Anargiri Greek Orthodox Church in Oakleigh,” Mr Dreyfus said.

“It was a deeply moving and very special night.”

“During lockdown for Greek Easter I sat on my verandah with a red candle at midnight. It meant the world to me to be back with everyone at Belmore,” Mr Burke said after the service.

“It’s one of the happiest and most welcoming nights of the year.

“I was also heartened to be joined by Zhi Soon, Labor’s candidate for Banks. Having a candidate whose family migrated from Malaysia to attend a Greek Orthodox midnight mass represents beautifully the diversity of our community.”