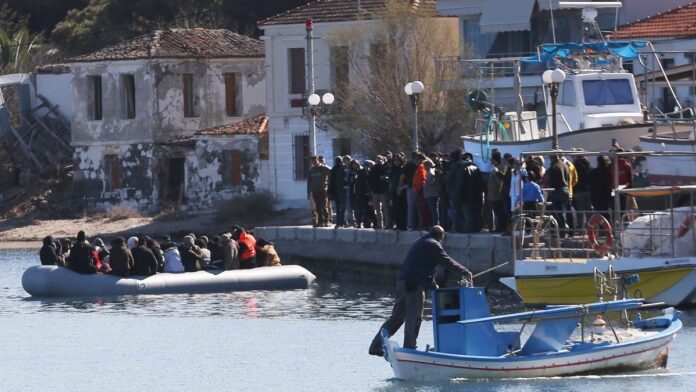 A search and rescue operation was underway in the eastern Aegean Sea on Wednesday after a dinghy carrying migrants either sank or overturned off the Greek island of Lesbos, the Greek coast guard said.

The body of one woman was recovered from the sea in the early afternoon, while 32 people — 15 men, 14 women and three children — were rescued, it said. One more woman was listed as missing, and two coast guard patrol boats, one volunteer rescue team boat and an aircraft from the European border agency Frontex were participating in the search.

The migrants were located during a routine patrol early Wednesday.

Earlier in the day, Migration Minister Notis Mitarachi issued a statement expressing his “sorrow for the shipwreck … and the loss of human lives.”

Mitarachi accused the Turkish coast guard of not assisting the migrants when they issued a distress call.

“It is inconceivable to allow inflatable boats, that do not meet any safety requirements and are being steered by people without permission and knowledge of the rules of the sea, to cross the Aegean,” he said.

“It is inconceivable to allow inflatable boats, which do not meet any safety requirements and are being steered by people without permission and knowledge of the rules of the sea, to cross the Aegean,” Mitarachi said in his written statement, adding that “those who allow it … are knowingly, unfortunately, putting human lives at great risk.”

Greece remains one of the most popular routes into the European Union for people fleeing poverty and conflict in the Mideast, Africa and Asia. The vast majority make their way from the Turkish coast to nearby Greek islands, often in unseaworthy and grossly overcrowded dinghies and boats.

Mitarachi also criticized refugee aid groups on the Greek islands, saying they are “encouraging these behaviors.” It wasn’t immediately clear what he was referring to, or whether any aid group had been involved in Wednesday’s incident. His ministry didn’t immediately respond to a request for further comment.