Nicholas Kapralos on mentoring the next generation of bouzouki players 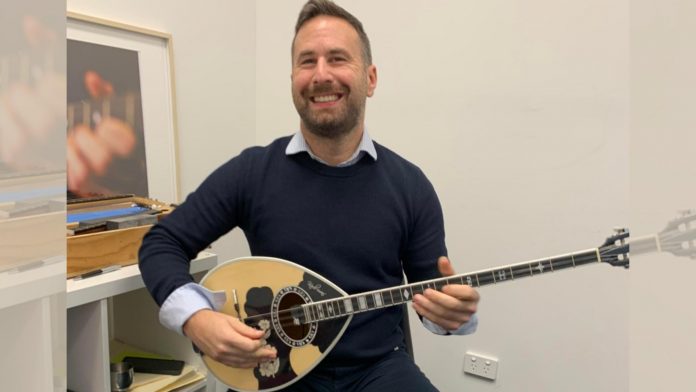 It’s a busy Saturday night in Melbourne’s iconic Oakleigh. The taverna is full of vibrant smells and sounds. The unique and brassy sound of the bouzouki swells through the space, which then comes to a sudden pause.

The bouzouki player, Nicholas Kapralos, speaks on the microphone with a Greek accent. “I would like to invite James Fokianos to the stage”. The diners go quiet and applaud whilst the young boy makes his way up to the stage.

Kapralos hands the boy his personal instrument and pats him on the back to reassure him and help deal with the nerves. After the discrete countdown, the music commences, and the pair play harmoniously whilst the crowd watches in awe.

A migrant from Greece who became a role model, a teacher and a friend, Nicholas Kapralos inspires children and adults alike by doing what he loves. This is his story.

Nicholas Kapralos and his journey in Australia

Kapralos migrated to Australia 22 years ago from Aigio, a small Greek coastal town of the Peloponnese, without a word of English in the hope of attending University and studying music. He was only 16.

Asked about his childhood back in Greece, he says it was a “holiday everyday,” playing in the streets with friends and moving freely through the town.

But life in Australia wasn’t the same.

“It was very difficult not knowing any English, and the lifestyle was different,” he tells The Greek Herald.

“But it was totally worth it and it has made me the person I am today.”

Despite his Greek heritage, Kapralos says he first developed an interest in heavy metal at a young age which prompted him to learn electric guitar and to study Classical Guitar upon his arrival to Australia.

He now specialises in a wide range of genres and musical instruments, including the Cuban Tres, the Guitar and the Electric Guitar.

‘Greek music is in my blood’

Asked when he started playing the bouzouki, Kapralos says he only started at age 18, explaining that “Greek music is in my blood.” His interest in learning and performing Greek music stemmed from him missing the homeland.

After two decades of practising and studying music, he is now part of several Greek and Latin bands around Melbourne and also performs as a solo musician.

“Being a musician is sort of hard to get by and you need to be versatile,” he explains.

Discussing the highlights in his career, he says that passing on his skills to future generations is something he really enjoys.

“It is rewarding seeing somebody progress and enjoy what they do, while being able to inspire them and make a difference in their life,” he says.

For the last year he has been teaching bouzouki and guitar to Alphington Grammar students while running two ensembles in his own time, including Senior Greek and Latin Band.

“At a young age I was a little bit naughty and music made me calm,” he says, explaining that he now strives to help students find their personal connection with music.

“Music is a universal language and there are no boundaries”.

Aside from his career as a musician, Kapralos enjoys spending time in nature, as it has been a vital part of his life being born in the coastal town of Aigio.

Where does he see himself in the future?

He says that alongside being healthy, enjoying music and inspiring other people with what he does, he hopes to release his own original music pieces in a year’s time.

Asked about his advice to his students and aspiring musicians, he emphasises the importance of being “genuine to yourself and respectful to other people.”

“Always follow what your heart tells you,” he concludes.

*Anastasia Fokianos is a senior student at Alphington Grammar School in Melbourne and has been interning with The Greek Herald this week.