Kosta the Kri-Kri: The Cretan goat putting smiles on the faces of young kids in Sydney 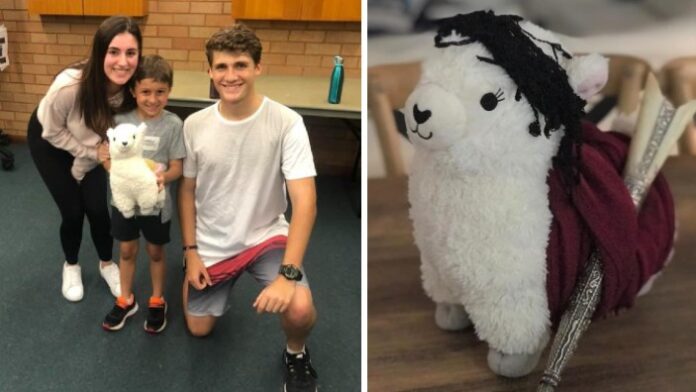 Kosta the Kri-Kri is guaranteed to become an internet sensation. He dances to Cretan music, tutors young children and loves playing dress up.

But there’s a catch.

What really makes Kosta unique is that he’s actually a toy goat named after the kri-kri goats found only on the Greek island of Crete.

Kosta came onto the Greek community scene about seven weeks ago when a Facebook page was launched in his honour.

The mastermind behind the page is 19-year-old Vayia Spanoudakis, who is a dancing teacher of the Cretan Association of Sydney and NSW’s dancing groups.

Vayia tells The Greek Herald exclusively that her idea for the page was simple. She wanted to document the adventures of Kosta as he lives with a different student from the junior and intermediate dance groups every week.

“When I started as a dancing teacher, I wanted to reward the children with something every week. I didn’t want to do chocolates and lollies so we decided to bring in Kosta the Kri-Kri,” Vayia tells The Greek Herald.

“He teaches them responsibility but also to have fun. That’s why we asked them to take photos with him during the week and we put them on Facebook so we can all see and keep up with his adventures.”

The adventures of Kosta the Kri-Kri:

So far, Kosta has visited the beach with his friends, come face-to-face with a loveable cat and even met His Eminence Archbishop Makarios. But best of all, he’s been named the official mascot of the Cretan Association of Sydney and NSW.

“Everyone loves it! The children get so excited and I find that they listen even more during dancing class as well because I put Kosta at the front and they know he’s watching,” Vayia laughs.

The dancing teacher says that the children also learn more about their Cretan culture by going on adventures with Kosta and this is the most important thing of all.

“Kosta the Kri-Kri doesn’t look exactly like the traditional Cretan goat but it’s the closest I could find and it still teaches students about their Cretan culture,” Vayia says.

“They know what it is now. It’s not just a goat but the Cretan goat and we teach them the history of Cretan dances as well.

“At the end of the day, it’s just about seeing the children happy and actually wanting to dance.”

And with a soon-to-be celebrity like Kosta the Kri-Kri guiding the children through their classes, there’s no doubt their love for Cretan dance will only continue to grow.