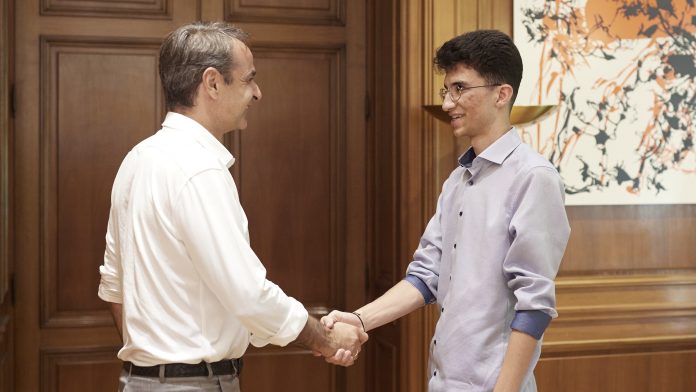 Baigi met with the Prime Minister at Maximos Mansion in Athens on Monday.

While talking to Baigi, Mitsotakis noted that “we always want to be very open in cases like yours, so as to give all the children who came here — especially the unaccompanied refugee minors – (…) the opportunities to be able to learn the language, to study here and to live here.”

“Greeks are those who take part in education, those who feel Greek and who want to learn the language, live here and raise a family,” the Greek Prime Minister added.

Baigi is the second child of refugee parents who, with their family, arrived on the island of Lesvos in 2019 from Iran. At the time of his and his family’s arrival he did not speak a word of Greek.

In a short three years, he learned Greek and scored an average of 18.25 out of 20 in his final exams, a score that he hopes will secure him a place at the School of Electrical Engineering in Thessaloniki.

“I learned Greek in three years because I was living in an environment that spoke Greek,” Baigi said in an interview with local media.

“All refugees can learn Greek and integrate into the local communities. It is enough to give us the opportunity.”

The student left his difficult life behind in Iran and is looking forward to the opportunities that Greece has and continues to offer him.

“With the help of my teachers, I made it,” Baigi said.