History made as Donald Trump is impeached for a second time 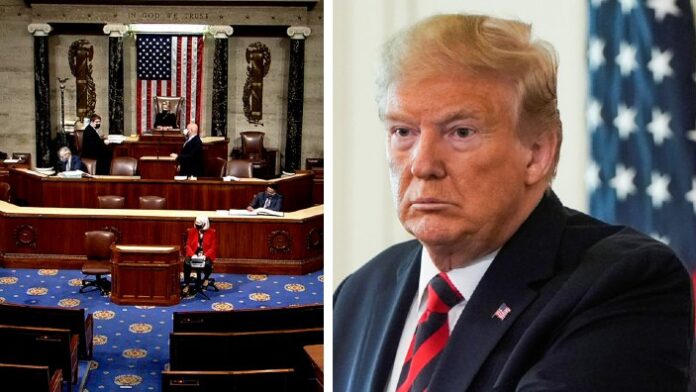 The House of Representatives has voted 232 to 197 to impeach US President Donald Trump for inciting an insurrection against the US government.

He is the first President in US history to be impeached twice.

Most Republicans in the House opposed the Democrats’ resolution, but at least half a dozen had stated their intention before the vote to break ranks to support it.

Democratic House Speaker Nancy Pelosi, in a speech before the vote, said: “He must go. He is a clear and present danger to the nation we all love.”

Republican Senate Leader, Mitch McConnell, announced before the House vote that a Senate trial would not be held until after Democrat Joe Biden’s inauguration, meaning Trump will serve out the remainder of his term.

Donald Trump was last impeached in December 2019 on two articles — an abuse of power and obstruction of Congress — but was acquitted by the Senate voting along party lines.

In a video released via Twitter on a government account belonging to the White House, Mr Trump addressed the nation but did not mention impeachment.

Instead, he focused his remarks on the violence at the Capitol and threats of future violence at Mr Biden’s inauguration next week.

“I want to be very clear, I unequivocally condemn the violence that we saw last week,” he said.