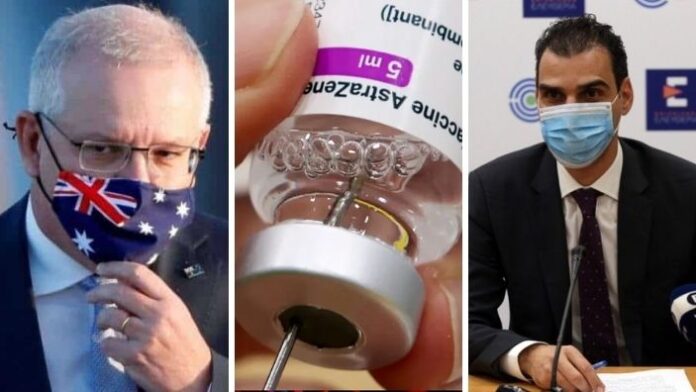 Australian health authorities have advised the Pfizer vaccine should be given to Australians aged under 50, amid concerns of rare blood clots potentially linked to the AstraZeneca vaccination.

The federal government’s expert medical taskforce met on Thursday to consider the use of the AstraZeneca vaccine, following advice from the European Union’s medical regulator that “very rare cases of blood clots” were a side effect in the weeks after the vaccine was administered.

The United Kingdom has already decided to offer other vaccines, such as the one produced by Pfizer, to people aged under 30.

Chief Medical Officer Paul Kelly made the announcement, flanked by the Prime Minister Scott Morrison, in an unexpected press conference on Thursday night.

Professor Kelly said people who have had their first dose of the AstraZeneca vaccine, and had not experienced any “adverse side effects”, can be given their second dose.

Greece’s National Committee of Vaccinations is considering whether to restrict the use of the Oxford/AstraZeneca Covid-19 vaccine to a specific age group, because of the risk of a rare blood clot syndrome, a Health Ministry official said on Thursday.

“The National Vaccination Committee will most likely give its opinion on the AstraZeneca vaccine today or tomorrow at the latest,” said Marios Themistokleous, Health Ministry secretary general for Primary Health Care.

“We do not expect major changes in our vaccination schedule and there is no question in any European country of stopping vaccinations with this vaccine,” adding however that “what is being discussed is age restrictions.”

He went on to say that despite the upheaval, the rate of the public’s participation in vaccinations exceeds 90 percent and that there are 10,000-12,000 vaccinations with AstraZeneca on a daily basis.

The move follows an announcement by Europe’s drug regulator on Wednesday that it had found a possible link between AstraZeneca’s Covid-19 vaccine and rare blood clotting issues in adults who had received the shot, while adding that the incidents are rare.

*With information from: ABC, Kathimerini