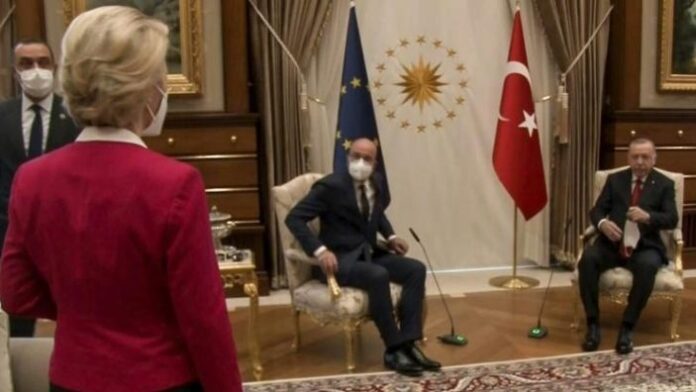 Former EU Commissioner, Anna Diamantopoulou said the head of the European Commission should have addressed the diplomatic mishap in Ankara where she was left without a chair during a meeting with President Recep Tayyip Erdogan.

The incident took place when European Council President Charles Michel, who was with Ursula von der Leyen at the meeting, took the only chair available next to Turkish President Tayyip Erdogan, relegating her to an adjacent sofa.

“Ursula von der Leyen should have been the protagonist of #SofaGate. She should have demanded, in front of the cameras, the observance of the protocol or leave in grand style. This is what I would have expected, as a woman and as a European,” she said in a tweet on her official account.

Von der Leyen and European Council President Charles Michel met Erdogan in Ankara on Wednesday. The Commission chief was clearly taken aback when the two men sat on the only two chairs prepared, relegating her to an adjacent sofa.

“I absolutely do not agree with Erdogan’s behaviour towards President von der Leyen … I think it was not appropriate behaviour and I was very sorry for the humiliation von der Leyen had to suffer,” Draghi told reporters.

“With these, let’s call them what they are, dictators, with whom one nonetheless has to coordinate, one has to be frank when expressing different visions and opinions,” he added.