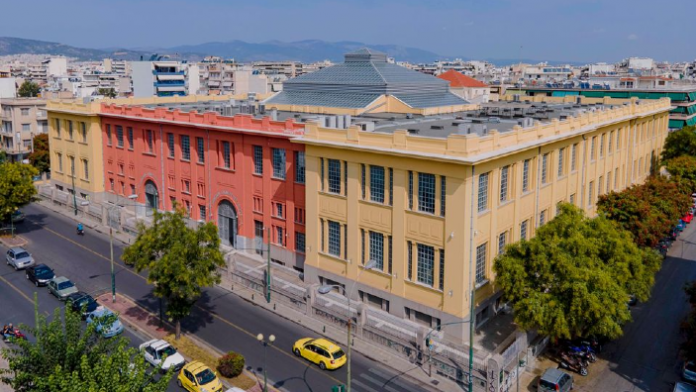 The Athens Public Tobacco Factory at 218 Lenorman Street has become a cultural centre to mark the 200th anniversary of Greece’s liberation from the Ottoman Empire this year.

We take a look back at the factory’s incredible history and share five top facts you should know about it:

1. When was the factory built?

The Public Tobacco Factory was built between 1927 and 1930, and designed by civic architects Pavlos Athanasakis and Antonis Ligdopoulos.

The factory was built by the Greek State at a time when the cigarette manufacturing industry was booming. They wanted to house tobacco processing or packaging companies and tobacco merchants’ warehouses to ensure the control of tobacco taxation.

Tobacco was one of the most important crops in the Greek countryside and from the time it was taxed, in 1876, it was a valuable source of income for the Greek state.

So at the beginning of the factory’s operation in 1930, about 25 small tobacco companies were co-located in the building, the last of which left in the early 1990s.

The factory occupies an entire city block, covering a total area of approximately nine acres. Its two floors were constructed in a square pattern, surrounding a ground-level patio, and covered by a glass roof atop an iron framework.

The floor plan of the building was designed in perfect symmetry, with the interior main spaces unified. Both the ground floor and the first floor had lofts. The construction grid that took place, allowed the flexible modifications of the building according to the various uses that it hosted over time.

3. Different uses for the factory:

Relatively quickly, with the prevalence of private tobacco factories and mechanised cigarettes, the demand for the building’s premises decreased, which led to its under-operation and the introduction of new uses.

From 1938, almost a quarter of the building was granted for a number of years to the Military Service of Athens, which housed according to the needs of each season the Army Health Service, the Military Tobacco Industry, military prisons (1945-46), residences of refugees from Romania (1952) etc.

The Military Service would leave permanently in July 1963, but again a large part of the building was allocated to various other public services as well, including services of the Presidency of the Government, the Ministry of Finance and the Statistical Service of Greece.

In 1989, the building and all of its machinery was acquired by the Hellenic Parliament and listed as a historic monument. Renovations on the property began in 2000, but efforts were slowed by the Greek financial crisis of 2009.

Half of the building, which comprises a city block, is currently home to the library of the Hellenic Parliament.

The factory is now being converted into a cultural centre. But converting the rest of the premises will cost €1 million ($1.2 million) in renovations, which are being funded by Neon, a Greek art foundation established in 2013 by collector Dimitris Daskalopoulos.

Once renovations are complete, the centre will open with an exhibition, Portals­, featuring international artists including Michael Rakowitz, Glenn Ligon and Danh Vo.

READ MORE: Historic tobacco factory in Athens to be renovated into cultural centre by 2021.