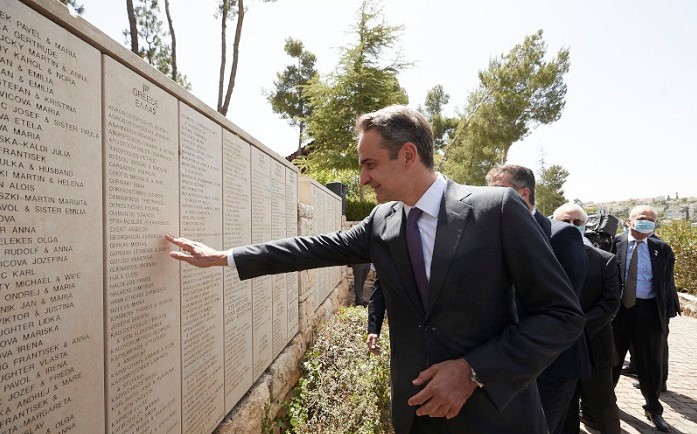 During the second day of his official visit to Israel, Greek Prime Minister Kyriakos Mitsotakis visited the Holocaust Memorial and located the name of his aunt at the Garden of the Righteous Among the Nations in Jerusalem.

Mitsotakis’ visit to Jerusalem’s Yad Vashem Holocaust Memorial was marked by a wreath-laying ceremony to pay tribute to the six million Jews murdered by the Nazis during World War II.

This ceremony was followed by a visit to the Garden of the Righteous Among the Nations where trees are planted in memory of non-Jews who saved the lives of Jews during the Holocaust.

Among the names of all 300 Greeks at the memorial was that of the Prime Minister’s own aunt, Evangelia Georgiadou.

“This is a special moment for me. Evangelia Georgiadou was my grandmother’s younger sister. She was my aunt. I remember her vividly. She did an act of bravery during the war like many other non-Jews who are honored as the Righteous among the Nations,” Mitsotakis said.

Georgiadou, a mother of two, who lived during the German occupation in the Athenian suburb of Philothei, helped save a Jewish girl named Yvette Ventura by offering her a place of refuge in her home.

The Georgiadou family warmly welcomed the little Jewish girl, offering her shelter despite being completely aware of the danger. Yvette was simply treated as the third child in the family from the beginning of 1944 until the Germans evacuated Athens in October of 1944.

Georgiadou and Yvette’s mother remained close friends after the war and continued to meet regularly for many years.

“This personal story,” Mitsotakis said, reminds us that “every name written on this monument tells us a personal story of bravery.”

Georgiadou was proclaimed as one of the Righteous of the Nations on November 3, 1986.