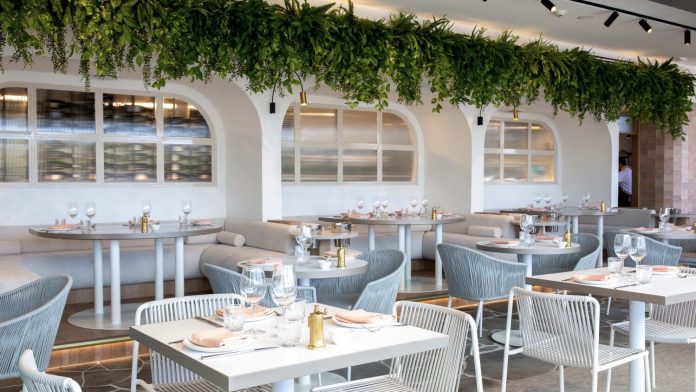 Michael Tassis’ new riverfront Greek restaurant and bar Opa Bar & Mezze in Brisbane is being described as a “Mediterranean escape” by reviewers.

“There’ll also be a lot of lamb on the menu and we’ll have over 30 bottles of high end pinot noir because lamb and pinot is always a good match,” said Mr. Tassis.

Mr. Tassis is the same owner behind restaurants George’s Paragon, Rico, Fatcow, and Massimo, some of which are Latin and Italian restaurants.

Opa boasts a monstrous menu offering breads and dips, fresh and raw dishes like sand crab with taramasalata, and large plates including moussaka, spanakopita, and stifatho.

It boasts a 21-strong mezzedes menu, with a dedicated mezze hour from 3 pm – 5:30 pm daily and special soul events every Friday to Sunday.

It offers a selection of Greek wine and cocktails named for the Greek gods.

The Courier Mail’s Alison Walsh describes the eatery as “aesthetically pleasing” and “…evocative of something you might stumble across on your Greek island sojourn.”

‘Opa’ is open from 11am until late daily.