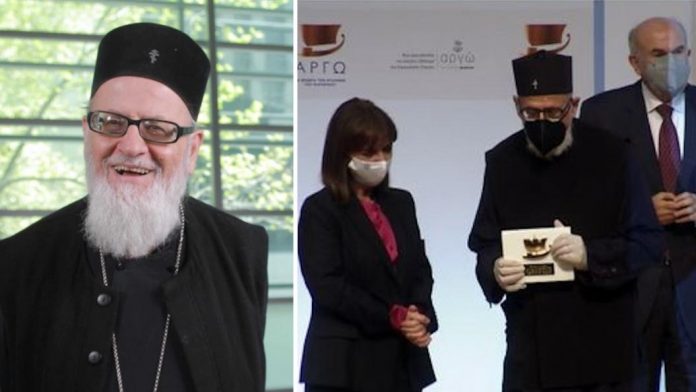 Eight distinguished diaspora Greeks were awarded the “Argo Award” for excelling in their field and promoting Greece abroad.

The President of the Hellenic Republic, Katerina Sakellaropoulou, presented the awards in a ceremony held on Thursday December 16 at the Benaki Museum in Athens.

Among the laureates, in the field of humanitarian contribution was a Greek-Australian priest, Reverend Themi Adamopoulo currently permanently residing in Sierra Leone, Africa, chancellor (protosygelos) of the Holy Diocese of Guinea, Themistocles Adamopoulos, or “Father Themi”. “That’s what they call me in my home, in Australia,” he stated to the “Greek Herald” in an exclusive statement before the award.

“I was in Sierra Leone when my phone rang and they told me they want to award me for my contribution. It was a special honour for me because it came from a non-secular, non-ecclesiastical group.

“Without wanting to make comparisons and be misunderstood, it reminds me when Mother Teresa was awarded the Nobel”, says Father Themistocles, who at the age of 7 emigrated with his parents from Alexandria, Egypt to Melbourne. There he grew up, studied political science and later converted to Christianity.

In 1999 he began his work against poverty in Kenya. About 8 years later, in 2007, he went to Sierra Leone, where he lives to this day trying to alleviate the suffering of the world’s underprivileged.

In his moving speech at the Benaki Museum, Father Themi thanked the Greeks of Australia for the financial support and underlined that the biggest scandal of today is poverty that afflicts Africa.

The “Argo Awards” are awarded for the third consecutive year and are an initiative of the “International Argo Union – Network of Greeks of Brussels”.

Greeks of the Diaspora are recognised in 8 categories. The winners this year are:

* Award for contribution to the Commons: Margaritis Schinas, Vice-President of the European Commission