“We all share the same goal”, President Sakellaropoulou insists in Tsipras meeting 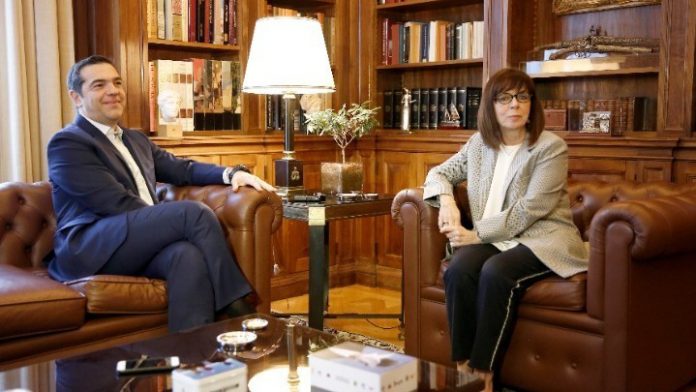 President Katerina Sakellaropoulou highlighted the need for responsibility and a willingness to cooperate during her meeting with opposition SYRIZA leader Alexis Tsipras at the presidential mansion on Friday.

She noted that all sides shared the same goal, which was the progress and prosperity of the Greek people and the preservation of social cohesion in order to face the crisis.

This was Sakellaropoulou’s first meeting with the main opposition leader since she assumed office in March, focussing on the repercussions of the pandemic on the economy and society.

Sakellaropoulou praised the responsible stance adopted by Greek citizens, as well as by opposition parties, in the last three months. The Greek president pointed out that Greece has now faced new challenges on an economic and social level.

She also expressed her understanding for the different political views on the handling of this unprecedented crisis, adding that different views were the very essence of democracy.

Tsipras expressed his fears that a very complex environment will arise with respect to labour relations and individual freedoms, adding that the economy’s problems will be bigger than currently estimated due to a deep recession.

The SYRIZA leader called the government’s support of enterprises insufficient and delayed, while he expressed fears that in labour relations there was the risk that certain emergency conditions will become permanent.

Addressing the president, Tsipras said that he looks forward to substantive cooperation between them. While he is aware that the president’s role and powers do not permit intervention in the actions of the executive branch, merely the highlighting of critical concerns that aims to alleviate the problems and inequalities is very crucial.

“We look forward to such a presence during your term in office,” he added.