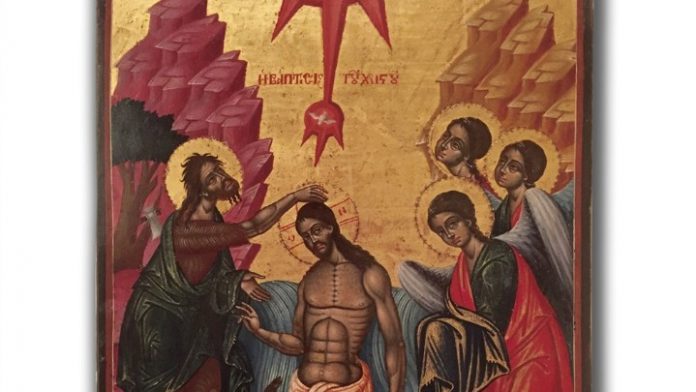 A nineteenth-century religious icon showing the Baptism of Christ, along with another eleven icons stolen in 2005 from the Church of the Dormition of the Visokos Virgin in Kalouta, in the central Zagori district of Ioannina, have recently been repatriated to Greece from the United Kingdom.

According to a statement by the Greek Culture Ministry, the 12 icons were returned on July 31, after Greek and UK authorities collaborated for their return, with the assistance of the Greek embassy in London.

“The icon of the Baptism was located in June 2017, by an archaeologist working for the Directorate for the Verification and Protection of Cultural Goods, on sale in a London gallery,” the Ministry’s statement says.

“Following the immediate mobilisation and close cooperation of the services responsible, with the assistance of the Embassy of Greece in London, the icon was withdrawn from the list of works for sale.”

London’s Metropolitan Police had then ordered the gallery to retain the icon until the investigation was complete and it was verified that it was the same one stolen from the Epirus monastery.

The key to the icon’s identification was the back view of the icon shown on the gallery website, which showed that it had been part of a church templon or screen — which had also been the location of the two other icons that were reported stolen from the same church.

One of these icons was located in another London gallery and returned in 2011, and another was recovered in Greece.

According to the Culture Ministry, the return of yet another religious relic stolen from Epirus, whose artistic treasures have been targeted by organised gangs over the last 25 years, is another link in a chain of repatriations that have recently taken place, with 21 icons located and returned since 2009.

Two additional icons have also been located after they were put up for sale at a German auction house in 2020, and their return is still pending, the Ministry noted.