From Kastoria to the Greek Museum of Adelaide: The story of a black velvet coat 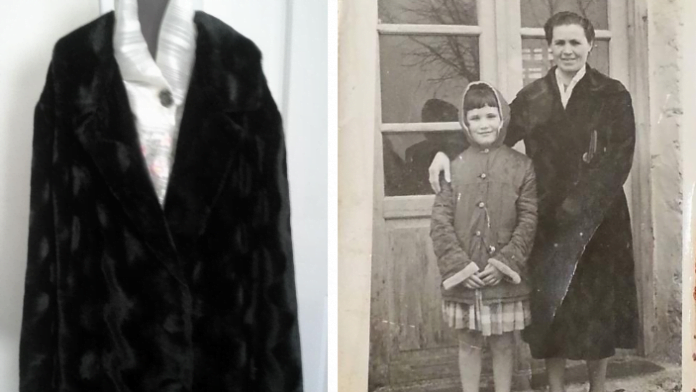 In December 1966, 14-year-old Katerina Loupa along with her parents Achillea and Malamati, immigrated from the small village of Kleisoura, in Kastoria, West Macedonia to South Australia, following their elder daughter who had already made Adelaide home for five years.

In their suitcases, all their belongings, memories and dreams for a better life. Malamati also brought her long, black velvet coat along.

“I tried to take it back to Greece, but I couldn’t fit it in my suitcase. This coat is of sentimental value to our family and I didn’t want it to end up in a pawn shop.

“The coat belonged to my father’s first wife, Theologia. When women in the village of Kleisoura, Kastoria got married they got given this black velvet coat called ‘Pelousi’. Unfortunately, on April 5 1944, the Germans invaded the village, burnt almost all the houses down and killed Theologia and her three children. My father managed to escape but he lost everything. Luckily, his house was not destroyed and this is how the coat survived”.

Achilleas’ first wife, Theologia and their children were among the 230 residents of Kleisoura that the German occupation forces executed under the command of Karl Schümers, at the ‘Kleisoura Massacre’, in retaliation for the execution of three German soldiers by ELAS close to the village.

Achilleas was young and he decided to get married again but since there were no women left in Kleisoura, he cast off to the next village, Germas where his friends introduced him to Malamati.

“My mother was tall and thin like Theologia and the coat suit her perfectly. She used to wear often the first few years in Australia. It was her Sunday coat,” says Mrs Katerina Loupa-Aldridge, who inherited and recently donated the vintage coat to The Greek Museum of Adelaide.

“My dream came true. I was always hoping that someone would start a museum. I was the first one to call when it opened. My wish is that my children, grandchildren and great-grandchildren can visit the museum and learn about their history and my village that I’m so proud of,” says Mrs Loupa-Aldridge.

The Greek Museum of Adelaide, a not – for – profit asociation was established in May 2019 aiming to promote and preserve the Greek culture in Australia. All the exhibits, that vary from coins and books to traditional costumes and musical instruments from as early as the 1910s, have been donated by families and individuals of Greek background, who live in Australia.

“We owe our exhibits to the generosity of 45 donors, who we want to thank and we seek to expand our collection. At the moment, we are looking for donations of Greek traditional costumes,” says The Greek Museum’s President, Chrysoula Melissinaki.

“We collect and preserve things that otherwise would have been gone to waste. Our goal is to promote our country’s cultural treasures and our own history and pass it on to future generations of Greek Australians and other people regardless of race and origin,” Mrs Melissinaki says.

Although The Greek Museum’s exhibitions were cancelled due to the restrictions caused by the coronavirus pandemic, the curator and the team are working hard to prepare their future exhibitions and events that may soon go online as well!