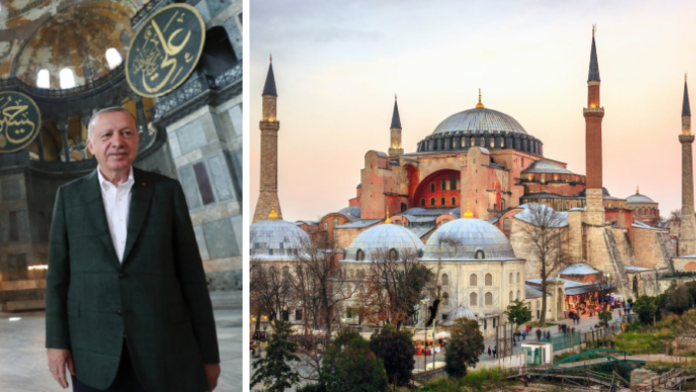 The World Heritage Committee of the UN’s cultural agency, UNESCO, has asked Turkey to submit a report by early next year about the state of conservation of Hagia Sophia, expressing “grave concern” over the consequences of its conversion into a mosque.

Turkey’s move last year to convert the revered Byzantine-era Hagia Sophia cathedral from a museum into a mosque sparked fury from the international community and added to tensions with Greece.

A month later, Ankara ordered another ancient Orthodox church, the Holy Saviour in Chora, to also be converted into a mosque.

UNESCO said in a statement that it expects Turkey to submit a report on both churches by February 1, 2020, and added it “deeply regrets the lack of dialogue and information” over the Turkish government’s intention to change the status of Hagia Sophia and Chora.

The committee expressed “grave concern about the potential impact of changes at these key components… on the Outstanding Universal Value of the property” and urged Turkey to engage in international cooperation and dialogue before any further major changes are implemented at the property.

But in response on Saturday, Turkey rejected the UN cultural agency’s criticism as “biased and political.”

The Turkish foreign ministry said it “rejects the relevant articles of the UNESCO World Heritage Committee’s decisions on Istanbul’s historical sites understood to be driven by prejudiced, biased and political motives.”

The Turkish government is “fully aware of its rights, prerogatives and responsibilities towards its properties on the UNESCO World Heritage List,” the ministry’s statement added.

This condemnation by UNESCO comes one year after Hagia Sophia was reopened as a mosque, an anniversary which was commemorated by Erdogan over the weekend.

The Turkish President called the iconic 16th century structure a “symbol of the revival of Turkish civilization” on Twitter and also shared a video of the first Friday prayer at Hagia Sophia last year.

In his post, Erdogan also said he hoped for the call for Muslims prayers and Quran to never abandon the converted structure “until the end of time.”

In response, the Greek Orthodox Archbishop of America Elpidophoros issued a statement on Saturday on Twitter.

”Hagia Sophia is the embodiment of our Orthodox Christian Faith,” Elpidophoros said in a tweet.

”We mourn its conversion to a mosque. Every culture is worthy of respect and Hagia Sophia, the epitome of the Byzantine achievement, should have been left as a place of cultural intersection and religious harmony.”