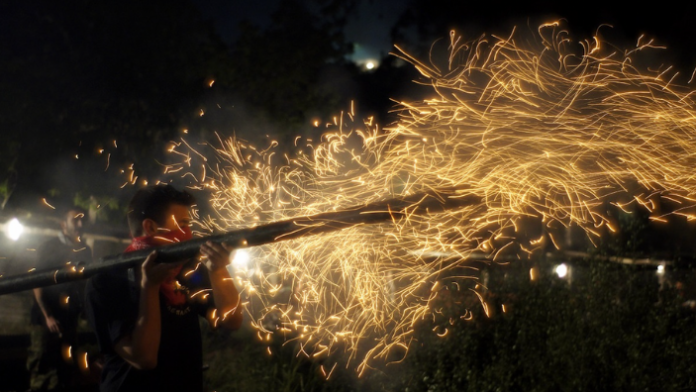 The rocket war is a custom observed every Easter in Vrontados of Chios, during which on the night of the Resurrection thousands of improvised rockets are fired between the two churches of the area, Panagia Erithiani and Agios Markos.

The preparation takes place several months before the teams of the two parishes make the “explosive cocktail” from charcoal, nitro and sulfur and place it on the Rockets. On the evening of Holy Saturday, the rockets are set up on wooden bases, in order to get the appropriate trajectory and achieve their goal.

The spring sky is flooded with colorful flashes and the clicks of thousands of flaming rockets that create a spectacular atmosphere impressing all visitors. The custom has its roots in the period of the Turkish rule, when the Vrontadoussoi used small cannons with loud clanging to celebrate Easter, but the Turks, under fear that they could be used against them, banned them and replaced them with improvised rockets.

On Easter Sunday, the rockets that find their target are counted and at the end the winner is decided. The two “rival” parishes renew their “battle” for the following year, thus maintaining the tradition for many years.

IT TAKES 3-4 MONTHS TO PREPARE

The “Greek Herald” spoke with Yannis Apostolis from Chios, who has been engaged with the preparation of this “battle” from a young age, in order to give us more details about the custom, which is one of the most famous in the world.

We asked him when does the preparation start and how many people are involved. He told us that “the preparation starts after Christmas and it takes 3-4 months to get ready. Around 200 people are invloved in both parishes to get that result you see every year. It’s a total of 40 crews of 4-5 people doing the job. Each crew has a specific task which deals with the moulds, the materials, the binding of the rockets. A whole process is required to be ready every year.”

We asked him how many rockets they make annually and he replied with sincerity that “the numbers have fallen quite a lot in recent years. Now, there may be 3,000 of each parish, when we used to have 80,000 each. You understand what was going on. There have been many problems and complaints from residents, and we have ended up in courts numerous times”.

Is the custom dangerous? “if the proper measures are taken, if wires are put into churches and houses, in short if the proper preparation has been made, there is no danger, at most one in a million to hit someone”.

Do they keep score? Does a winner emerge? “No, no, we don’t keep score, alas. Every half hour we fire 500 rockets each side. We used to fire 5,000 rockets every 15 minutes. Quantity has always played a part. Whoever had the most, was also the unofficial winner. But, what matters is custom and tradition, we have nothing to divide between us.”

100% OCCUPANCY IN HOTELS FOR CUSTOM

Rocket War is also a big source of revenue for Chios, right?

“it is a huge source of revenue for the island. That weekend there is 100% occupancy in the hotels. People come from Turkey, from China and the United States, who usually stay for 15 days, not only for the custom, but also for a nice holiday. We also get a lot of visitors from Italy. For Chios the Rocket War is very important for tourism.

“The tourists participate in the Rocket War. They watch the process of creating the Rockets, we have them light 1-2 Rockets, generally they like to participate. The whole event is well organised with emphasis on safety”.

How is the situation with coronavirus and also how much are the young children involved?

“There is less participation from children compared to when I was little. One year the Rocket War was cancelled because residents were protesting and now for the past two years with Covid also the situation is very different. This year we’re going to throw some rockets in uninhabited territory, not in churches. Due to coronavirus measures things will be done differently. But even so, we will honor the custom that makes Chios and Vrontados famous all over the world.

“When it comes to young kids, 50% are engaged with this custom compared to the past. I thing children do not participate because of the cost involved. There no sponsors and the cost for rockets exceeds 10,000 euros for each parish. Everything comes from our pocket, while many man hours are required.”

This is what Giannis Apostolis told the “Greek Herald” about the rocket war in Vrontados of Chios.

A unique, different and very beautiful custom, which is well known all over the world. And the residents of Chios will do everything to keep it alive…