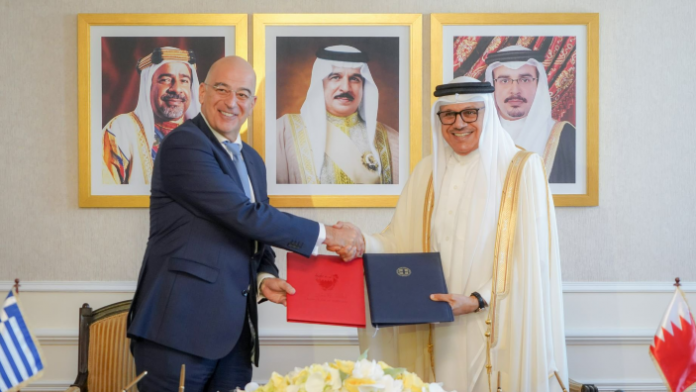 Greek Foreign Minister, Nikos Dendias, has paid a three-day visit to Manama, the capital of Bahrain, and on his last day he met with his Bahraini counterpart Abdullatif bin Rashid Al Zayani.

During their meeting, the two Foreign Ministers signed a memorandum of understanding on political consultations, Ekathimerini reports.

“Bahrain is a country which has always stood by us in international organisations, supported our candidacy for the UN Security Council, and has condemned the conversion of Hagia Sophia into a mosque.”

Greek diplomatic sources said Dendias used the visit to boost the collaboration of the legal departments of the foreign ministries of both countries.

Dendias was the only EU minister to attend the Manama Dialogue Forum, the biggest regional conference on security issues, which was also attended by the US Defense Secretary and Israel’s National Security Adviser.

During his visit, Dendias was received by King of Bahrain Hamad bin Isa Al Khalifa, to whom he extended President Katerina Sakellaropoulou’s invitation to visit Greece at the earliest opportunity.