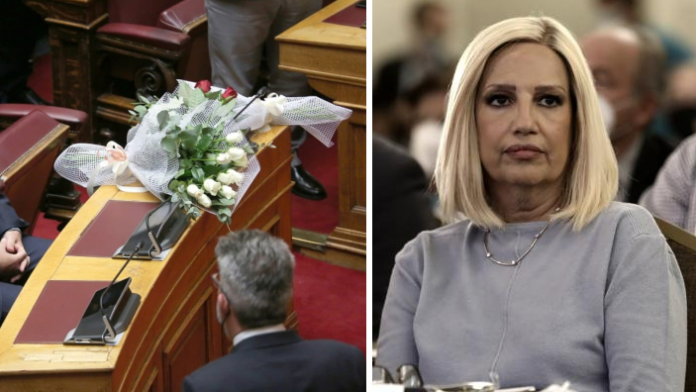 Greek Parliament has been suspended until the end of the week to mark the death of Fofi Gennimata, the leader of Greece’s third biggest party, on Monday.

It is the “smallest tribute” the House can pay to the president of center-left Movement for Change (KINAL), parliament speaker Konstantinos Tassoulas said.

In addition, Greek Prime Minister, Kyriakos Mitsotakis, declared a day of national mourning for Wednesday when Gennimata’s funeral will take place in Athens.

Tributes pour in for Gennimata from Greece:

In a written statement following the announcement of the 56-year-old’s death after a long battle with breast cancer, Mitsotakis hailed Gennimata as a “symbol of courage for all women, but also for men being tested by serious illnesses.”

“I bid her farewell with respect, but also overwhelmed by the thoughts provoked by her unjust and untimely death,” he said as he was returning from a trip to Saudi Arabia, which he cut short at news of her death.

“She was a fighter for life, battling with dignity the challenges to her health and the enemy that hit her family,” he continued in reference to the fact that her father, Georgios Gennimatas, one of the founding members of the PASOK socialist party that later became a part of KINAL, also died of cancer.

For his part, Alexis Tsipras, the leader of Greece’s main opposition party SYRIZA, described Gennimata’s death as an “impoverishment of the country’s political life.”

She “battled for life until the very end with determination and dignity,” Tsipras said.

Greek President, Katerina Sakellaropoulou, said on Monday: “We say farewell to Fofi Gennimata with a sense of profound sadness… She fought every battle in her life, the small ones and the bigger ones, with dignity, without losing her bright smile.”

The secretary general of the Greek Communist Party (KKE), Dimitris Koutsoumbas, said: “I express my deep sorrow for the loss of Fofi Gennimata, leader of KINAL, to whom I say goodbye with great respect for her honesty, but also for the bravery with which she gave the battle for life.”

MeRA25 chief, Yannis Varoufakis, added that her death “deprives us of a person who could not be spared in Parliament, a woman who put the brakes on the male domination of the political stage.”

The Leader of the Australian Labor Party, Anthony Albanese, also sent a message of condolence to the Greek community on the passing of Gennimata.

“Deeply saddened to hear of the passing of Fofi Gennimata in Greece overnight. Many Greek Australians were touched by her passion for the Greek diaspora. On behalf of the Australian Labor Party, I send my condolences to her family and friends,” he wrote.

Later, the Board of the Greek Orthodox Community of Melbourne and Victoria also issued a statement expressing its ‘deep sorrow’ at the death of the prominent politician.

“Fofi Gennimata has always stood by the side of expatriates and expatriate organisations during her many years of presence and contribution to the political scene of the homeland,” the statement reads.

Cypriot President, Nicos Anastasiades, on Monday lamented the death of a “young politician connected to me by a selfless friendship” in his condolences message on the passing of Gennimata.

“Her sensible and well-grounded political discourse will be missed by us all,” he said.

European Union Commissioner, Margaritis Schinas, said in a tweet that Gennimata was dedicated to the service of “democracy and national consensus.”

“She made a contribution during some critical times for the country; with dignity, ethos and decency in every battle,” he added.

Gennimata was credited for establishing the Greek public health system during the government of PASOK in the 1980’s.

The politician was president of the Panhellenic Socialist Movement (PASOK) since 2015. Since 2017, she served as the president of the Movement for Change, a coalition of center-left parties formed around PASOK.