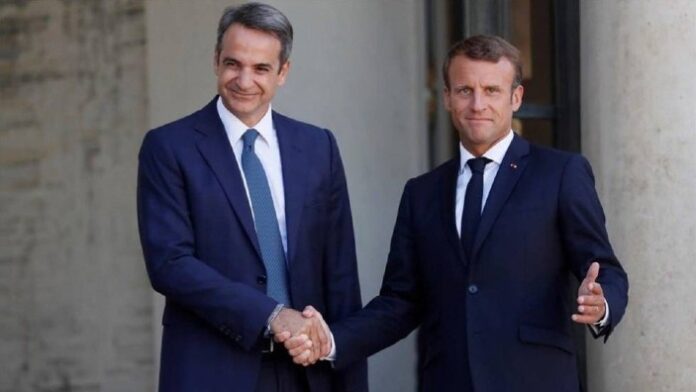 Talks focused on the upcoming European Council (to be held via teleconference), the report on Turkey by European Union foreign policy chief Josep Borrell, developments in the Eastern Mediterranean and Libya, and the fight against COVID-19.

Macron last week canceled a visit to Athens where he was expected to attend celebrations on March 25 commemorating the bicentenary of the beginning of Greece’s War of Independence in 1821.

The decision was made as the French government imposed a month-long lockdown on Paris and parts of northern France against the virus.

With regards to Josep Borrell’s EU report on Turkey, Greece considers it “positive and balanced” as it includes a lot of satisfactory points even if there are “some deficiencies,” according to diplomatic sources who spoke to Ekathimerini.

These sources say the positive points are that the report has a two-fold approach both for a possible positive agenda and for the prospect of sanctions, which are clear and set out in detail.

Athens is also satisfied with the fact that the report is clear in terms of the delimitation of the exclusive economic zone (EEZ) and of the continental shelf. The disagreement should be resolved through dialogue in the context of International Law, including the UN Convention on the Law of the Sea (UNCLOS), and if a solution is not reached through the dialogue, the two countries should have recourse to The Hague, the sources said.

The report depicts in a generally objective way the developments in the context of the EU-Turkey relations.