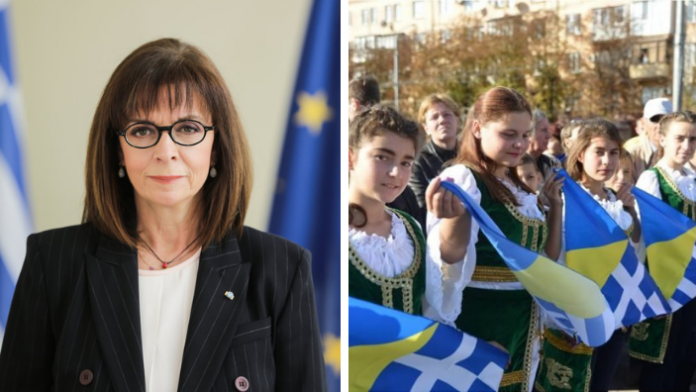 Greece’s President, Katerina Sakellaropoulou, has expressed her support for the Greek diaspora in Ukraine amid rising tensions with Russia over the last few days.

In a post on Facebook, Sakellaropoulou wrote that Greece’s “thoughts are on the Greek communities of Ukraine,” which include those “cities and villages where our language is still heard, the schools where lessons are taught under the Greek flag, and the expatriates of all ages who keep alive in their hearts the bond with their Greek roots.”

The female President then gave a number of examples to stress the continued resistance of the Greek diaspora in Ukraine despite constant tensions with Russia.

“The proud spirit of our expatriates, as expressed in their thousand-year presence in the region of Ukraine, remains strong during these difficult times. We honour their strength, we are close to them and we support them,” Sakellaropoulou concluded.

READ MORE: Greece affirms solidarity with diaspora in Ukraine amid tensions with Russia.

This statement comes after a tumultuous 24 hours in which Russia mobilised its tanks and artillery into east Ukraine and Western nations, including Australia, hit back with unprecedented sanctions, travel bans and restrictions.

Amid these rising tensions, Greece has also made plans for additional gas supply with government spokesman, Giannis Oikonomou, confirming the news on state television on Wednesday.

Mr Oikonomou said that Greece will try to get as much gas as it can via a pipeline which runs from Azerbaijan to Italy.