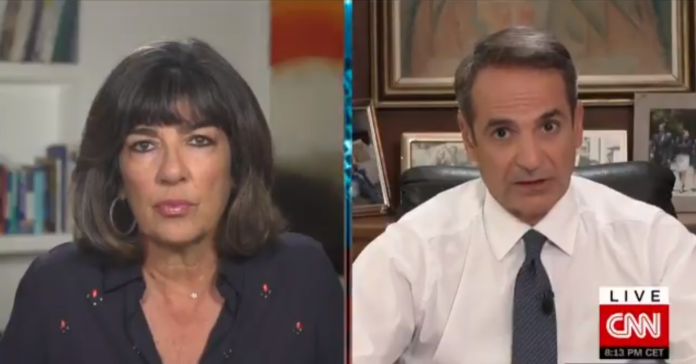 Greek Prime Minister, Kyriakos Mitsotakis, has called on Turkey to “stop the provocations” in the Eastern Mediterranean and return to the negotiating table in order to resolve disagreements regarding the delimitation of maritime zones.

“My message to Turkey is very simple: stop the provocations and let’s start talking as civilised neighbors,” he said during an interview with CNN’s Christiane Amanpour on Wednesday evening.

Expanding on this possibility, Mitsotakis referred to the recent agreement with Egypt for the demarcation of exclusive economic zones, saying it could “serve as a blueprint” for other agreements in the region.

“But this cannot happen if we are engaged in sabre-rattling and if we have to face, now and then, half the Turkish fleet sailing in the Aegean or the eastern Mediterranean,” he continued.

He also reiterated a proposal for Athens and Ankara to refer the issue to the International Court of Justice (ICJ) in The Hague, if bilateral discussions do not yield any results.

“We should sit and discuss as civilised neighbours and if cannot resolve this issue the two of us, we can always take it to the international court and have the court decide on our behalf,” Mitsotakis said.

“But what we cannot tolerate is unilateral activity by Turkey claiming what we consider to be Greek exclusive economic zone and for Turkey to challenge this premise by sending not only an exploration ship, but also a significant number of military vessels to the area.”