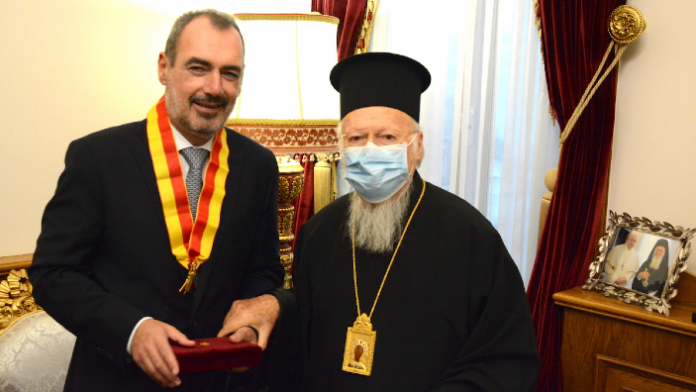 Greece’s Deputy Foreign Minister, Andreas Katsaniotis, has been awarded the Cross of St Andrew the First-Called by Ecumenical Patriarch Bartholomew on Tuesday.

Mr Katsaniotis was in Istanbul to represent the Greek Government at the Thronal Feast of the Ecumenical Patriarchate in honour of its founder St Apostle Andrew the First-Called.

The Deputy Minister was also accompanied by the Secretary-General of Hellenes Abroad and Public Diplomacy, Ioannis Chrysoulakis.

After receiving the distinction, Mr Katsaniotis said it was “one of the most moving moments of my journey” and praised the Ecumenical Patriarch for his hard work.

“It is clear that the centuries-long course of the Ecumenical Patriarchate is inextricably linked to the historic land of Constantinople in which it continues, and will continue, its high ecumenical mission,” he said.

During the rest of his visit to Constantinople, Mr Katsaniotis also met with expatriates and educational institutions of the Greek minority, and inaugurated a Painting Exhibition at Sismanogleio Megaron.