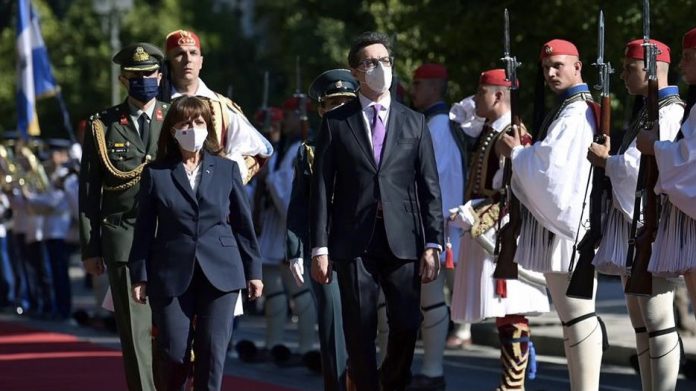 Pendarovski received Sakellaropoulou’s support for his country’s effort to join the European Union (EU) and for the improvement of economic relations between the two countries.

“As countries sharing borders, Greece and North Macedonia have an even greater responsibility before their peoples to collaborate and strengthen our bilateral relations based on respect of the principle of good neighbourliness and international law, to the benefit of our countries and the region in general,” Sakellaropoulou said.

Prime Minister Mitsotakis later called for the EU to commit to the accession prospects of western Balkan nations.

“Time is running out,” he said from the European People’s Party conference, “and if the European Union is absent from this region, there is no doubt that others will rush to fill the void.”

Pendarovski alluded to North Macedonia’s similar NATO accession in March 2020 and said “and we are now formally allies, devoted to promoting and defending common values, and stability and prosperity for the region and the entire Euroatlantic zone.”

President Pendarovski said he was honoured to be the first president of the Republic of North Macedonia to visit Greece.

The country only normalised relations with Greece in 2018 after agreeing to change its name to North Macedonia to address Athens’ concerns for its own northern region of Macedonia.