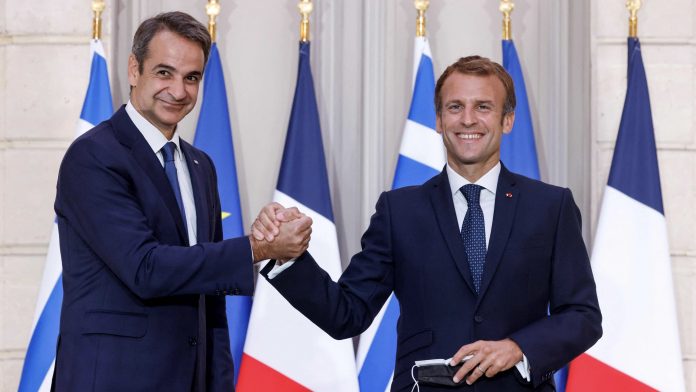 Greece’s lawmakers have ratified its landmark defense deal with France to include a mutual assistance clause.

The clause includes an oath for the two countries to help defend each other in the event of an attack.

“For the first time, an explicit and unequivocal military assistance clause is provided in the case of a third party attack on one of the two states,” Greek Prime Minister Kyriakos Mitsotakis told lawmakers.

“We all know … who is threatening whom with a casus belli (a cause for war) in the eastern Mediterranean.”

The clause states that the two sides will come to each other’s aid “with all appropriate means at their disposal, and if necessary with the use of armed force if they jointly ascertain that an armed attack is taking place against the territory of one of the two.”

Greece’s five-year pact with France, which includes the purchase of three French frigates, has been met with controversy since its announcement last week.

The two countries are bound to NATO’s collective defense tenet, which stipulates that an attack on one member nation is an attack on all.

NATO Secretary-General Jens Stoltenberg appeared to be critical of European defense initiatives that aren’t within NATO.

“What I don’t believe in is efforts to try to do something outside the NATO framework or compete with or duplicate NATO…,” he said in a speech without directly mentioning Greece’s defense deal with France.

Greece’s opposition party Syriza voted down the pact in parliament, arguing it imposes too many concessions on Athens, including the risk of involvement in France’s overseas military operations.

“You have been exposed and must explain why you now reject what you were hoping to achieve in December 2020,” Mitsotakis responded on Thursday, referring to opposition leader Alexis Tsipras’ previous favour of a close relationship with France.

Greece has been allying with France and the US as it disputes with Turkey over maritime and airspace boundaries.

Greece is currently concluding defense negotiations with the US to allow American troops to access Greek military bases.