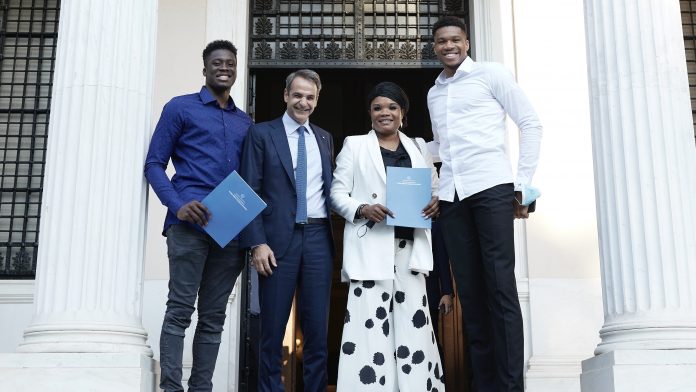 The Milwaukee Bucks star attended a ceremony at Mitsotakis’ official residence which bestowed citizenship on his mother Veronica and younger brother Alex.

“We always felt Greek, but now we have an official stamp and we are happy,” Antetokounmpo told reporters after the ceremony.

“Alex and my mom are Greek citizens now.”

Antetokounmpo, 26, is an Athenian-born Greek-Nigerian who grew up in Sepolia.

He was born to parents who migrated from Nigeria and was granted Greek citizenship in 2013.

The citizenship allowed him to travel to the US and join the Bucks later that year.

“The face of the whole Antetokounmpo family reflects the Greece that struggles, overcomes the difficulties, and keeps its family united,” Kyriakos Mitsotakis later wrote on Twitter.

Over time, Antetokounmpo has earned the nickname ‘Greek Freak’.

He led the Bucks to their first NBA title in half a century at the championships in July.