‘Friendship the only solution’: Istanbul mayor meets with Athens counterpart and Greek PM 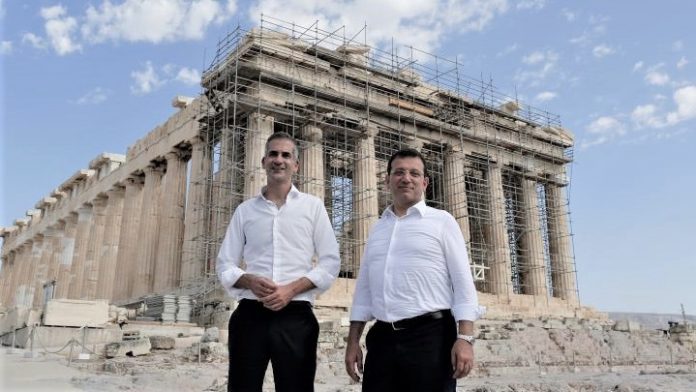 The mayors of Greece and Turkey’s capital cities met to discuss relations at the Athens City Hall on Tuesday.

Bakoyannis said “problems are solved from the bottom up. People create them and people solve them. Even if they are created by governments or – to be precise – regimes, they can be solved by the people.”

“Our differences are real, but local administration is the closest democratic institution to the citizen and this allows us to be able to interpret human emotions more effectively.”

“Friendship between the two countries is not one of the solutions, it is the only solution,” he said.

Bakoyannis went on to treat his counterpart to a tour of the Acropolis and a show at the Herodeon theatre.

Imamoglu’s visit will close with a tour of the Ancient Agora, Syntagma Square, and Zappion on Wednesday.

The pair signed a memorandum of understanding and cooperation in the fields of culture and tourism in Istanbul in May.