Apostolos Apostolakis from Crete named Greek Captain of the Year 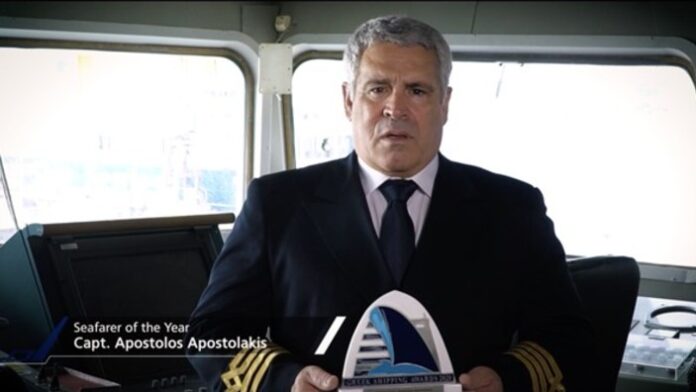 Captain Apostolos Apostolakis was awarded ‘Seafarer of the Year’ at the prestigious Lloyd’s List Greek Shipping Awards on December 4, for his professionalism and expertise in dealing with a coronavirus-related passenger emergency this past Spring.

A total of 260 cases of COVID-19 had been found among the 400 passengers and crew on Apostolakis’ ship, the Eleftherios Venizelos, back in April.

In response, the captain, who had tested positive for the virus himself, was quick to enforce anti-virus measures by isolating sick passengers and docking the ship in the Piraeus port to get those severely ill to emergency treatment.

Apostolakis works for the Greek passenger shipping company, ANEK Lines, one of the largest in the country. Both the company and Apostolakis himself are natives of Crete.

The awards, which were hosted virtually by Nigel Lowry of Lloyd’s List and Adriana Paraskevopoulou, news anchor at Greek public broadcaster ERT, also recognised others in 18 further categories of achievement.

For the first time in 16 years, a woman walked off with the Greek Shipping Personality of the Year Award – Anna Angelicoussi of Alpha Bulkers, Alpha Gas and Pantheon Tankers.

Other top personalities recognised were Suzanna Laskaridis, founder of Real Time Graduates and Blue Cycle, who won the Next Generation Shipping Award for personalities under 40, while the president of the Passenger Shipping Companies Union, Michalis Sakellis, was named Newsmaker of the Year.

Guy Platten, Secretary General of the International Chamber of Shipping, was elected International Personality of the Year, the only award exclusively for non-Greeks, for his tireless efforts to solve the international crew change crisis.

Other honorees included ONEX Shipyards, owner of the Neorion yard in Syros, for single-handedly reviving the prospects for Greek shipbuilding and ship repair.