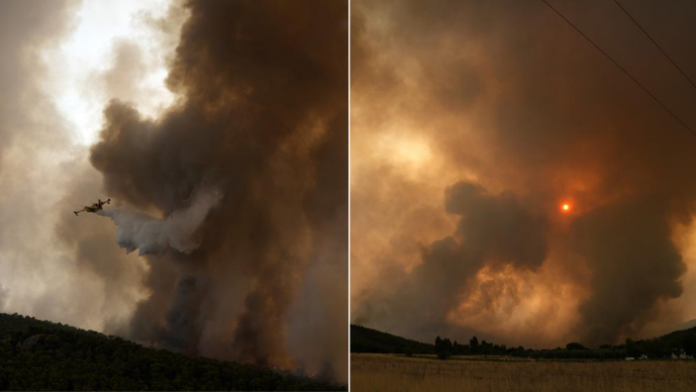 The Greek government has sought assistance from abroad three weeks into taming wildfires which broke out on August 3.

A major wildfire near Vilia is on the wane but not yet under control after four days, Citizens’ Protection Minister Michalis Chrisochoidis said Thursday.

Chrisochoidis said Greece had accepted a further offer of help from Romania, which would be sending firefighters and vehicles.

The fire has burnt homes and led to evacuations of nearby villages northwest of Athens.

Hundreds of Greek and Polish firefighters and more than two dozen helicopters and planes have been deployed.

Reinforcements were sent, with 22 helicopters, including two from Russia and one from United Arab Emirates, and 11 planes providing air support to 451 firefighters and 166 vehicles.

Nikolaos Loanas says he lost his home to the fire in the nearby village of Thea.

“I’ve had [my house] for about 40 to 45 years and it was built through hardship, with a lot of effort, sweat and stress,” he said.

“It was 45 years’ worth of memories. …. My wife and I moved here when we were young, my two children grew up here, played here, had fun here, my three granddaughters liked it here.”

Firefighters have worked around the clock to exhaust fires in Evia, around Athens, and the Peloponnese.

The government has appealed for help through the European Union emergency response team.

About 24 European and Middle Eastern countries have responded to the request. Most have since returned home.

The wildfires come in the wake of the country’s worst heatwave in about three decades and has parched shrubland and forests.

While the cause of the fires has not been officially established, more than 12 people have been arrested on suspicion of arson.

Scientists say there is little doubt that climate change from the burning of coal, oil, and natural gas is driving more extreme events.