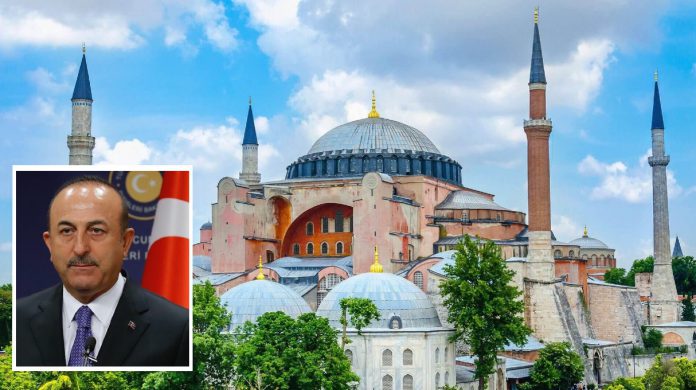 Turkish Foreign Minister, Mevlut Cavusoglu, has declared that Greece has no right to protect Hagia Sophia, the nearly 1500-year-old former cathedral, as it is “on Turkish territory.”

“Hagia Sophia is on Turkish territory, it was conquered,” Cavusoglu told Turkey’s 24 TV. “What we do in our country and with our property is up to us.”

Cavusoglu added that Athens is the only capital city without a single mosque and hence, should be the last to criticise Ankara.

“On the pretext of COVID-19 spread, Athens also did not allow the mosques to open in western Thrace,” Cavusoglu said.

This controversy between Greece and Turkey began on Friday, May 27, when Turkey celebrated the 567th anniversary of the Fall of Constantinople with Muslim prayers at Hagia Sophia.

At the time, the Greek Foreign Ministry released a statement condemning the move as “an unacceptable attempt to alter the monumental character of Hagia Sophia,” as well as a challenge to the religious sentiment of Christians everywhere.

“We once again call on Turkey to respect its international obligations and stop putting domestic expediencies ahead of its very privileged role as guardian of a monument as important as Hagia Sophia, which belongs to all of humanity,” the statement added.

On a number of occasions, Ankara has also strained relations with Athens by hinting that Hagia Sophia might be turned back into a mosque.