Dimitris Skartsilakis: ‘The war prowess of Australians and New Zealanders is awe-inspiring’ 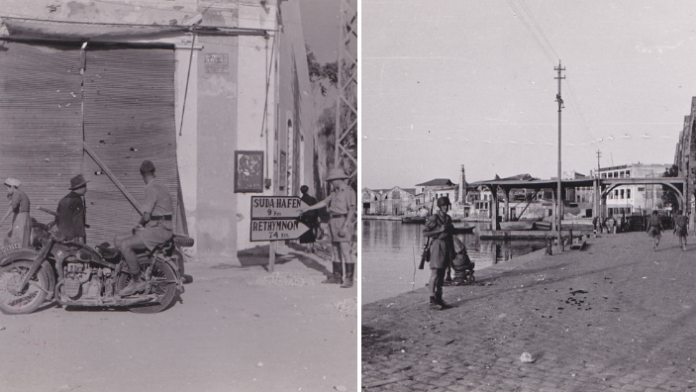 Historical researcher from Rethymno, Dimitris Skartsilakis, talks to The Greek Herald about the Battle of Crete, whose importance and the crimes committed by the Germans are reflected through the collection of 10.000 photographs that he has.

Mr Skartsilakis is currently finishing his book where he will focus on the Battle of Rethymno and the death of the nine brave Australians who attempted a heroic raid against the Nazis.

He is a man passionate about history and his birthplace. A faithful servant of the heroes who left their blood on his island, Crete, to remind everyone to this day that borders do not matter when the most precious thing is at stake for a man: his freedom!

How did you decide to deal so deeply with the Battle of Crete?

“Let’s take it from the beginning. Crete is a bloodstained island, it is full of revolutions and a lot of war events up to our recent history. Dealing with the Battle of Crete is something I experienced indirectly because I met people who took part in it at that time, such as my grandmothers… I think every Cretan up and down my age has such experiences. So I started to study history. Initially at a very young age with local literature, local publications with testimonies. Later I also discovered the existence of photographs through German and English literature. After that, as soon as the internet began to spread, I began to take part in auctions and buy photos from the Battle of Crete and World War II in our country in general.

Now, this record comes chiefly from German soldiers and allies The ones of Allies are rarer. The Allies did not allow cameras, only some officers had them. On the other hand, the Germans promoted photographs and propaganda. That is, photographs of soldiers were used for the propaganda of the time. In the volume of material that exists there are photos of both ordinary soldiers and not professionals, but they are well taken. Either way, in the Battle of Crete 3/4 of paratroopers had a camera with them. I choose the photos that will end up in my collection. At the moment I have around 10,000 photos – a huge amount of material. In them you will see war issues, monuments, killed, executions, war crimes by the Germans, their graves, a lot of things.”

You should rather make a museum of your own?

“Yes, the truth is that I have a huge amount of material. The point is research. It is not a simple collection! I try through them to do research and bring to light unknown aspects of the war. Many times I visit the battlefield and try to set it up in my mind to draw some safe conclusions, because from maps and testimonies you do not get the correct picture. You have to go and see the shape of the field. You have to go and see the circumstances under which an incident took place. For example in Maleme, why the New Zealanders could not stay there, and were accused of leaving and abandoning the area. This is where the fall of Crete began.”

What has impressed you most through your research? Although it sounds an oxymoron to use the word “impress” for such atrocities.

“Now, it seems that I am so used to it and I am impressed by fewer and fewer things. The most impressive we can mention is the material that exists from the Battle of Crete. That is, we can safely say that the Battle of Crete is the most photographed War event in World War II. Thousands of photos exist. I have a collection of a few thousand, but there are other collections with so many photos.

This happens for two reasons: a) in ’41 the war camera was too strong, so they used photography and propaganda too much, and b) the soldiers had the time to take photos and keep them in albums which survived. Later in Russia, they did not have this comfort because the balance began to tilt against the Germans. There were heavy losses, and they did not have time to take pictures. In Crete they assumed that they would take the island very quickly and they got what they got, but I must say they were well organised in taking photos. Beyond that, Crete is an island full of war spoils, from the battlefield. You can find helmets, pieces of equipment and aircraft, uniforms… Anything can be found either on the battlefield or on stakes and barbed wire. The world was poor then, and whatever was found was used. I think all the Cretans see them and are influenced by all this. And let’s not forget that there are still two monuments of the Germans. I do not think there is anything similar in Europe. The evil bird is the one, that is, the monument of the German paratroopers, which unfortunately some destroyed and is also the bows of the mountain hunters”.

How much was the biggest amount you had to pay for a photo?

“I’m not talking about amounts. Everything is relative and does not matter.”

Were there difficulties in the process of obtaining a photograph? Which photo made you chase it a lot?

“There were pictures I was anxious about until I got my hands on them. These are photographs showing war crimes by the German army. For example, at one point, a folder with photos of an execution in Rethymno was lost. An execution we have never seen is unpublished and it was lost to me somewhere in Belgium and finally came into my hands after three months. We knew it as a fact, but there was no material. Finally, it was found! That’s the agony I’m going through.”

“I bring to mind my book to be in the hands of relatives of the ANZACs.”

You told me you started writing a book…

“Yes, for the last 2-3 years I have been writing a book about the Battle of Rethymno, which includes primary sources, such as the war diaries of soldiers at the word and order level. There are war diaries of Australians, testimonies from Greeks about what happened on the Battlefield, plus there are too many unknown photos. All this has connected a puzzle and I aspire to cover the Battle of Rethymno through this book. There is already a very good book by the lateMarkos Polioudakis, but in my book there are some additional which were not possible to find then”.

The unpublished photos in which the war crimes of the Germans are attested will be included in this book?

“YesI am planning to include them in the book. In the Battle of Rethymno the paratroopers suffered a lot of damage so they had few photos in relation to Chania”.

But why are you standing in the Battle of Rethymno?

“I start with this because it is my place and I think I have to do it. Then I’ll try to do something else.”

When do you think the book will be ready?

“I was hoping that it would have finished last year, but due to professional obligations, it is not over yet. It needs some final touches, but most of it is ready. I believe it will be published in a year’s time.”

Through the research you have done what is the image you have formed of the contribution of Australians and ANZACs in general?

“Australians and New Zealanders, in the memory of the Cretan people have been imprinted as superheroes. They fought bravely, and all generations admire them infinitely. And from my grandfather I have heard a lot. There is an awe of the martial prowess of these men. Truly it is terrible to think of how far these men came to fight alongside some who from the beginning had so little chances against a perfect Army. I think the ties between Cretans and ANZACs are very close to this day. And Australians and New Zealanders themselves are pursuing these ties, making memorials, giving out medals and awards. They are bonds that must remain close in order to remember our history and the partnership against one adversary.”

You have brought to mind that your book can be found in the hands of relatives of soldiers who fought in Crete?

“Yes, I have it in my mind. The first thing to be done is to come out in Greek and then an English version will be the highlight”.

Even in Greek, I think it would be a precious “jewel” for the library of these people, since it will contain many photographs.

“It will have a lot of photos and three-dimensional maps. I work with my friend and collaborator, Nikos Valasiadis, who is an archaeologist and graphic designer and he is also an expert and a very good result has come out in terms of maps. It’s a tremendous job, it’s not a simple book.”

You will also be engaged in a battle where nine Australians were killed?

“Yes, I have already done a lot of research on this battle. This story is known in Australia. I managed with the help of Nikos Valasiadis but also with the photographic archive I have to locate exactly where this event took place. That is, where the death of these nine Australians came from the attack of the Germans (note: The group of Australians of the 2 / 11th Battalion consisted of: Corporal T. Willoughby, Lance Corporal Dowset, soldiers: Brown, Elvy, Fraser, Green, McDermid, White and Proud). There are photos from the battlefield and through my research I found even the shells from the weapon used and also the well which is mentioned for that battle”.

You have contacted the Cretans who are in Australia, for the possibility of seeing your photo gallery here?

“We are acquainted with Mr Tsourdalakis. They have talked to me about taking my exhibition there, although that is very difficult to happen now because of my work. Of course, only the exhibition could travel to Australia, without me. But I usually go with the exhibition because I know how to set it up. A trip to Australia is also a big deal. With the Australian Embassy in Greece I have already collaborated twice, we had an exhibition that took place first in Rethymno and then in Athens”.