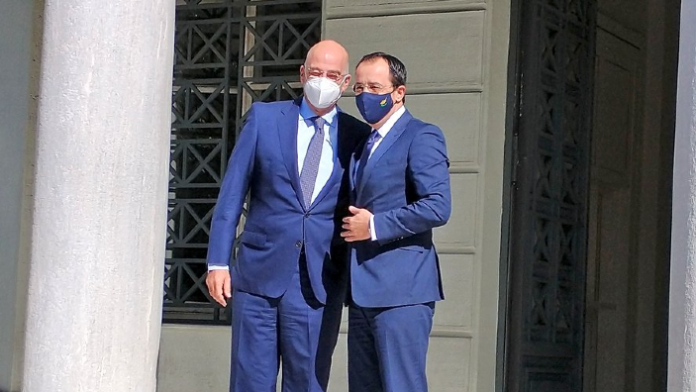 The Foreign Ministers of Greece and Cyprus condemned Turkey’s “illegal actions” in the Eastern Mediterranean after a meeting in Athens on Monday.

“Greece does not pose a threat to anyone, nor will it be bullied by illegal actions,” Greek Foreign Minister, Nikos Dendias, said.

“It will protect its sovereignty [and] its sovereign rights in accordance with international law and the law of the sea,” he said.

Referring to the 63rd round of low-level exploratory talks that are set to take place in Ankara Wednesday, Dendias rebuffed recurring Turkish calls for the demilitarisation of Greece’s eastern Aegean islands and accused Turkey of “undermining [the contacts] before they even begin.”

The Greek foreign minister also condemned plans by Turkey and the self-declared breakaway state in northern Cyprus to partially reopen the abandoned resort of Varosha, as well as plans to hold military drills inside the Mediterranean island’s territorial sea. Dendias also slammed a recent Turkish announcement regarding energy exploration on Cyprus’ continental shelf.

“Turkey’s behavior is not acceptable,” he said, while warning of European sanctions.

In his comments, Christodoulides said that Turkey’s recent harassment of the Nautical Geo research ship of the island of Crete, as well as plans to conduct research in an area reserved by the Nautical Geo southwest of Cyprus “demonstrate, even to the most skeptical [observers], that the pleasant-sounding statements that once came from the direction of Turkey are, regrettably, not turning into actions.”

“[Turkey’s] foreign policy is still founded on a revisionist, neo-Ottoman approach, mostly based on the country’s military power,” he said.

US call for de-escalation of tensions in East Med:

This meeting comes as the United States reiterated their support for efforts to de-escalate tensions in the Eastern Mediterranean, including the continuation of talks between Greece and Turkey, following the harassment of a Greek Cypriot research vessel off the coast of Turkey.

A State Department spokesman said the US “encourages all states to resolve maritime delimitation issues through peaceful dialogue and in accordance with international law.”

The Turkish Defense Ministry said on Monday that the Nautical Geo, a Greek-Cypriot research vessel under the Maltese flag, was taken away from the Turkish continental shelf at the weekend after being warned that it was trespassing.

Sources inside the Defense Ministry of the Republic of Cyprus said that the Nautical Geo was conducting research inside the island’s exclusive economic zone (EEZ) when it was harassed by Turkish vessels illegally sailing in the area.