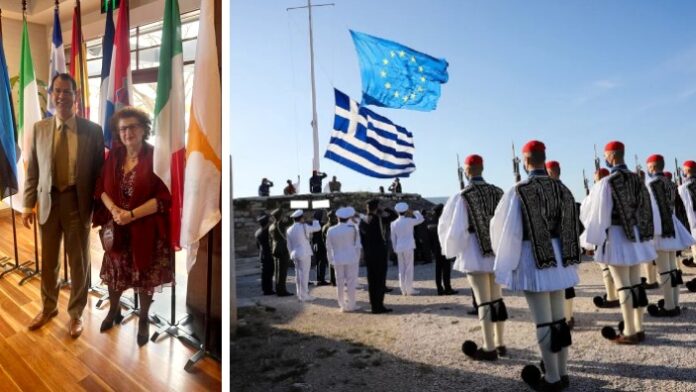 The flags of Greece and the European Union were raised at the Acropolis early on Sunday morning in celebration of Europe Day 2021.

The ceremony was attended by the Greek President, Katerina Sakellaropoulou, and European Commission Vice-President and Commissioner Promoting our European Way of Life, Margaritis Schinas.

May 9, or Europe Day, celebrates peace and unity in Europe as it marks the anniversary of the historic ‘Schuman declaration,’ which led to the creation of the European Coal and Steel Community. This proposal is considered to be the beginning of what is now the European Union.

“For our country, the European Union is a place of prosperity and security. We participate in its values, in our common European life and culture. We are proud of what we have achieved with our European fellow citizens and we have high expectations for the future,” President Sakellaropoulou said to mark the occasion.

“Europe must respond to the challenges of our time, the pandemic, the economy and climate change, with unity and solidarity.”

For his part, Mr Schinas wrote in a tweet after the Acropolis ceremony: “Europe Day today at the sacred rock of the Acropolis. Greek and European flags together for the first time at the monument of global culture. A unique, unprecedented moment. Greece and Europe together, always consistent before history’s commanding calls.”

Speeches were given before all dignitaries were encouraged to enjoy traditional sweets and savoury food from the different European countries present.

The Cypriot delegate had haloumotes (halloumi cheese pies) and sweet daktyla (almond pies) on offer, while Greece brought semolina cake with orange syrup to the event, as well as fanouropita (a traditional fasting cake) and kourlouri Thessalonikis (sesame bread rings).

After enjoying the beautiful food, dignitaries returned home to find the National Carillon was also shining brightly in blue to mark Europe Day.