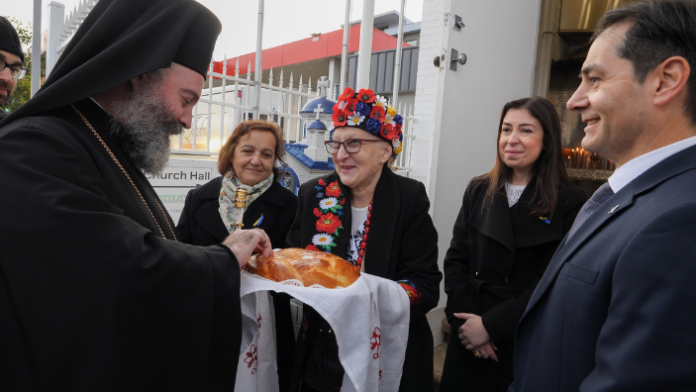 The Ukrainian Orthodox parish and community of St Savvas of Kalymnos in Banksia, Sydney have become the first in Australia to officially integrate into the Greek Orthodox Archdiocese of Australia.

According to a press release by the Archdiocese, His Eminence Archbishop Makarios of Australia visited the Ukrainian parish for the first time on Sunday, June 5 and presided over a Divine Liturgy.

In attendance on the day were also the Consul General of Greece in Sydney, Christos Karras; the High Commissioner of Cyprus in Australia, Martha Mavrommatis; the Member for Rockdale, Steve Kamper MP; and the Georges River Council Mayor, Nick Katris.

At the conclusion of the Liturgy, Archbishop Makarios gave a small speech and thanked parish priest, Father Savvas Pizania, for his valuable contribution to achieving unity within the community.

Archbishop Makarios also expressed his unwavering support for the Ukrainian people who are still suffering through the ongoing Ukraine-Russia war which broke out earlier this year.

The decision to place all Ukrainian parishes in Australia under the jurisdiction of the Greek Orthodox Archdiocese of Australia was made in May this year following a ‘vote of confidence’ by Ecumenical Patriarch Bartholomew.

READ MORE: All Ukrainian parishes in Australia to come under the leadership of Archbishop Makarios.