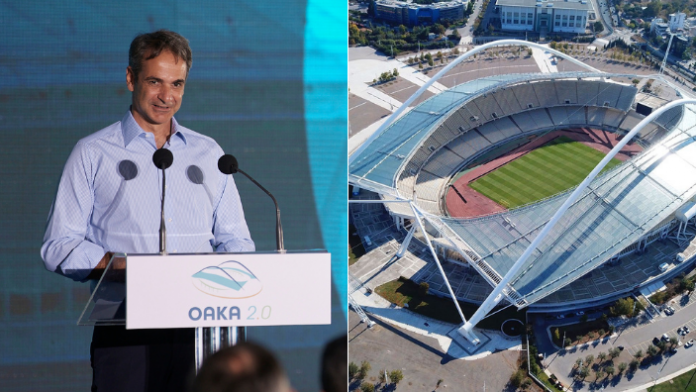 Prime Minister Kyriakos Mitsotakis says he will use funds from the European Union’s post-pandemic recovery fund to overhaul the Olympic Athletic Center of Athens (OAKA).

“I am delighted that after almost 20 years of inaction, this government has been able to invest the necessary funding to create a sustainable, state of the art sporting facility,” Mitsotakis said.

The new renovations of the “Olympic Park”, including repairs to the roof, will provide training facilities for athletes and serve as a recreational outlet for the more than 20,000 visitors it currently receives on the weekends.

The famed roof over the football pitch, which was designed by award-winning architect Santiago Calatrava for the 2004 Summer Olympics, has been wearing out, Mitsotakis said.

The Games were followed by “disappointment that very important facilities were abandoned,” he added.

Mitsotakis says the 43 million euros is expected to be followed by an additional private investment of more than 100 million euros (AU$160.715) to overhaul the stadium by 2023.

The combined 143 million euros follows almost 200 million euros (AU$321.37 million) which has been already spent on maintaining the stadium since 2005, according to the Greek government.

The OAKA sits on a 250-acre plot and houses Greece’s largest football pitch and other sports venues and has been incurring losses after a protracted financial crisis.