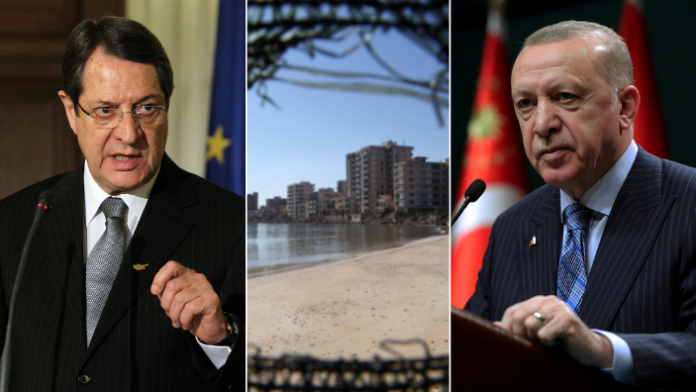 Cyprus President Nicos Anastasiades will preside over a session of the National Council to discuss  Turkey’s plans to reopen an abandoned suburb in Cyprus.

“I want to send the strongest message to Mr Erdogan and his local proxies that the unacceptable actions and demands of Turkey will not be accepted,” Anastasiades said.

The United Kingdom says it will be discussing the issue as a matter of urgency with other Council members, saying it was “deeply concerned”.

European Union (EU) foreign policy chief Josep Borrell also threw his support in, writing on Twitter that the move “risks raising tensions on the island & compromising return to talks on a comprehensive settlement of the Cyprus issue.”

“Turkey must immediately stop its provocative and lawless behaviour and comply with international law,” a statement from the Ministry reads.

It added that the Greek and Cypriot governments will work for a “just and sustainable” peace settlement along the principle of a bizonal, bicommunal federation.

The Ministry cited Turkey’s contraventions of United Nations (UN) Security Council resolutions, conclusions of the European Council, and calls from the international community, in their defence against the move.

Turkish President Recep Tayyip Erdogan and Turkish Cypriot leader Ersin Tatar kicked off the chaos a few days ago with a two-day trip to Varosha to announce their decision to resettle civilians in 3.5 percent of the area.

President Erdogan reiterated his call for a “two-state solution” in Cyprus, while slamming the EU for rejecting the idea.

“We will not take their advice… We will do what we need to do,” President Erdogan said on Tuesday.

President Erdogan said that the only route to lasting peace on Cyprus is through the international community’s acceptance of two seperate states.

“The international community will sooner or later accept this reality,” he said during celebrations to mark the 47th anniversary of the 1974 war.

Varosha, a southern suburb of Famagusta, remained deserted since Turkey’s invasion of Cyprus in 1974 made the site a military zone and split the island.

Nobody but the Turkish military had been able to enter since the war until Turkish-Cypriot authorities opened a small area of the once-booming resort town for day visits in November last year.