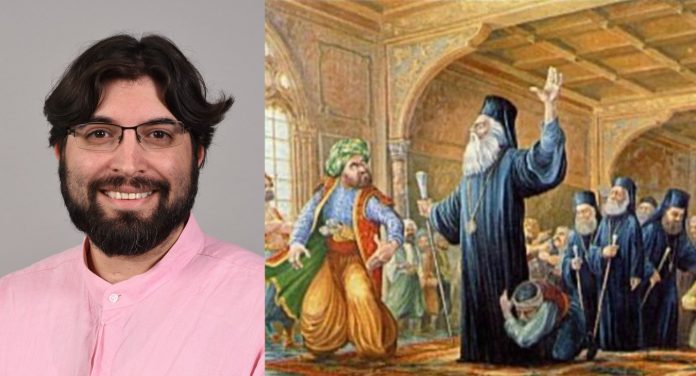 Associate Professor Andrekos Varnava, will give the online lecture Cyprus and 1821: Myths, Realities, Forgetting and Remembering, on Thursday 24 June, 7.00pm, as part of the Greek History and Culture Seminars, offered by the Greek Community of Melbourne.

The events of 1821 and of the entire Greek War of Independence hold a very important place in the script of the imagined Greek nation in Cyprus and for Greek Cypriot nationalism. This revolves around the execution of 400 leading Cypriots in 1821 and a failed uprising in Cyprus, as well as the contribution of Cypriots to the war on the mainland.

This chapter has two aims: first to revisit the Greek Revolution in relation to Cyprus, in so doing showing how nationalist narratives have come to obscure the realities of the impact of the revolution on Cyprus and the role of the island and its people; and secondly, to explore the impact of the Greek Revolution on Cypriot society and politics since then, including in the formation of EOKA in the 1950s, and the history of its commemoration, as well as its place in the Education system.

Associate Professor Andrekos Varnava, FRHistS, was born (1979) and raised in Melbourne to Cypriot-born parents, obtained his BA(Honours) from Monash University (2001) and his PhD (2006) from the University of Melbourne. He is the author of four monographs since 2009: Assassination in Colonial Cyprus in 1934 and the Origins of EOKA (Anthem Press, ppk.2021); British Cyprus and the Long Great War, 1914-1925: Empire, Loyalties and Democratic Deficit (Routledge, 2020); Serving the Empire in the Great War: The Cypriot Mule Corps, Imperial Loyalty and Silenced Memory (ManU Press, 2017; ppk.2019) and British Imperialism in Cyprus, 1878-1915: The Inconsequential Possession (ManU Press, 2009; ppk.2012).