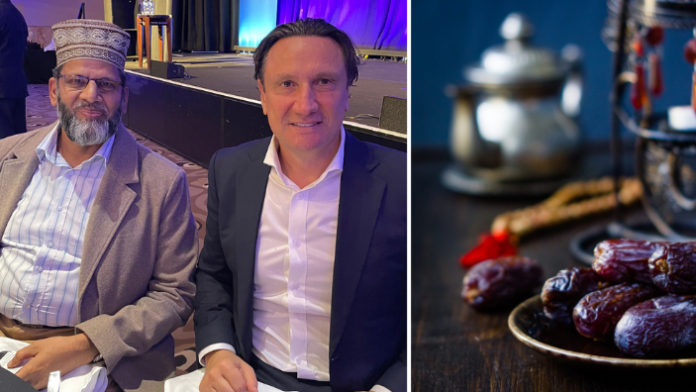 The seventh Annual Premier’s Iftar Dinner was held recently in Victoria and President of the Greek Orthodox Community of Melbourne and Victoria, Bill Papastergiadis, was there to share a meal and conversations with other community and religious leaders.

“It was a symbol of multiculturalism at its finest with representatives from all faiths in attendance. I had the privilege of being seated with Minister Horne along with a senior Jewish rabbi and Imam Mohammad Ramzan, amongst many others,” said Papastergiadis.

Last year, the Dinner was held online due to covid restrictions.

“In the speeches by the Acting Premier Mr Merlino and the Minister of Multiculturalism, Ms Spence, reference was made to the importance of diversity and difference and how these ideals are important in making our state such a vibrant and welcoming place

“Acting Premier Mr Merlino also noted how much he enjoyed his work as education minister by visiting schools and seeing so many smiling faces at school assembly all from so many diffrerent parts of the world,” Papastergiadis said.

“In his address of Dr Ibrahim Abu Mohammed, the Grand Mufti of Australia, specific reference was made to the relevance of peace in the muslim faith in that the greeting commences with the words “may peace be with you”.

Dr Ibrahim Abu Mohammed also reflected on how important it is to protect multiculturalism in Australia and he emphasised on the the need for the population to be vaccinated.

“Being seated with Imam Mohammad Ramzan, I had the opportunity to talk to him about his daily work. I learnt about the terrific work being done by him in the prison sector. A challenging role but one which Iman Mohammad Ramzan takes great pride in. Keeping people out of prison is an important part of what he sees his job is.

“I felt blessed to be an Australian the other night at the Iftar Dinner.  I felt blessed to be in  a country that respected each person’s faith and ethnicity. I also felt lucky to be in the company of many great people. Australia is one of the few countries globally that truly practices multiculturalism and respects all faiths. Events such as these bring us together,” said the GCM President.