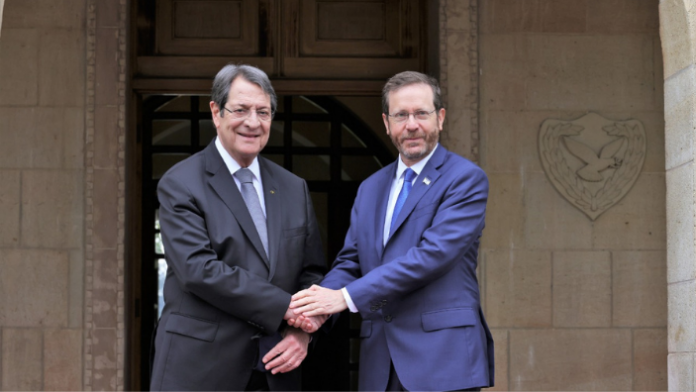 Any bid by Israel to improve strained ties with Turkey won’t come at the expense of its “strategic relationship” with neighbouring Cyprus, the Israeli president said Wednesday.

Isaac Herzog was speaking after talks with his Cypriot counterpart, Nicos Anastasiades, at the Presidential Palace in Nicosia, Cyprus.

Herzog said he’s aware next week’s visit to Turkey has touched a raw nerve in ethnically-split Cyprus, but added that “nothing in my visit and what would ensue will be on the account of this strategic relationship with your country.”

He said Israel seeks to strengthen relations and pursue dialogue with all nations and all faiths, including Turkey.

“We have to… if possible to lower the tension and move on in a true dialogue that would definitely include issues of climate and the economy,” Herzog said.

Herzog and Anastasiades also discussed the ongoing conflict with Ukraine during their talks, as well as the trilateral relationship with Greece and the ongoing energy cooperation between the countries.

“The fact that the war in Ukraine greatly impacts the energy supply and its prices, reinforces even more the argument and the belief that the EU needs diversified and stable energy supplies to guarantee its energy security,” Anastasiades said.

The Eastern Mediterranean, he added, could prove highly beneficial to the EU’s energy security.

“Cyprus and Israel participate in projects that fit very well into this discourse. The East Med pipeline, if proven technically and financially viable, can provide gas and hydrogen, thus diversifying European supply routes and adapting to various needs of the market,” Anastasiades said.

The Cypriot President also briefed Herzog about the latest developments on the Cyprus problem, thanking him for his stance against Turkey and for Israel’s commitment to reunify the island.

The Israeli president was then awarded with the Grand Collar of the Order of Makarios the Third during the ceremony, “for the contribution and future efforts in promoting universal values and enhancing the ties between the two nations.”