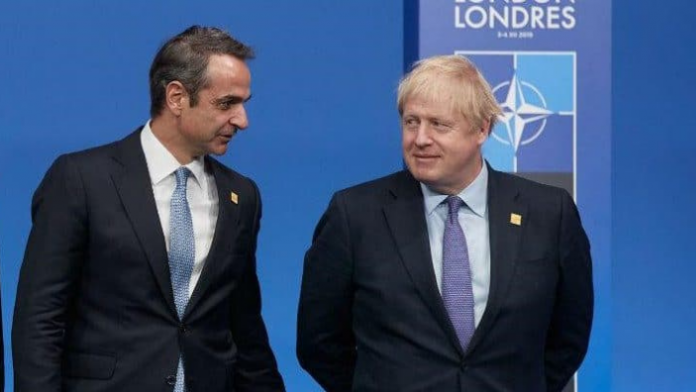 Prime Minister Kyriakos Mitsotakis called on British counterpart Boris Johnson to revise the travel restrictions for Greece which has remained on the UK’s “amber list,” requiring travelers to quarantine for 10 days on return to the country and taking two pre-booked Covid-19 tests whilst in quarantine.

The call came during a meeting before the start of the NATO Summit in Brussels.

Mitsotakis briefed Johnson “on the improving epidemiological picture in Greece, expressing the view that this permits a lifting of restrictions for British tourists visiting the country on holiday, while asking that the UK not discriminate between different European countries,” according to a press release from the prime minister’s office.

The Greek prime minister also briefed Johnson “on recent developments in Greek-Turkish relations and stressed the need for the de-escalation in tension so as to establish trust and allow dialogue.”

With respect to the Cyprus issue, he reiterated Greece’s position that the next steps for a resumption of talks can be agreed only within the given framework of the UN Security Council resolutions calling for a bizonal, bicommunal federation.

The two prime ministers also examined the implementation of the EU-UK withdrawal agreement, including the Irish Protocol and the good prospects for the Alliance via the NATO 2030 agenda.

Mitsotakis also thanked his UK counterpart for the invitation to attend the leaders’ summit at the 26th UN Climate Change Conference (COP-26) taking place in Glasgow in November 2021, which he accepted.