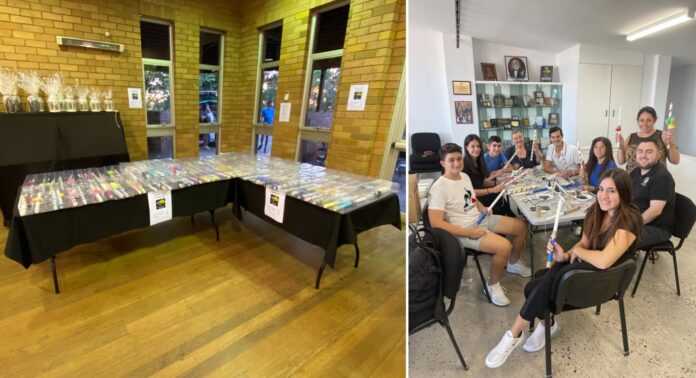 The tradition of making and selling lambades during Greek Easter is one of the few Greek customs that continues to grow as the next generation of youth celebrate this religious period.

Lambades are candles traditionally bought by the godparents, who visit their godchildren prior to Easter. Decorated with jewellery, colours or iconography, the lambades are lit on the midnight Holy Saturday service.

Usually made by elderly members various Greek communities across NSW, the Cretan Youth Committee this year took it upon themselves to carry out this special tradition as we enter the Easter week.

Terry Saviolakis, President of the Cretan Association of Sydney and NSW, said the Youth Committee originally had plans to make and sell the lambades last year, but were interupted by the COVID-19 pandemic.

“We’re planning to buy new traditional costumes and they were also planning a trip to Crete, which obviously all got postponed,” Saviolakis said to The Greek Herald.

The association sold the lambades outside the Ashbury Senior Citizens Centre, which has long been the location of their ‘clubhouse’ and is where they go dancing every Friday night.

Greek Orthodox Easter will be celebrated on May 2nd this year as people express their happiness in being able to celebrate in person, after being forced to commemorate the religious tradition from home last year.

“They have actually this year taken on our kitchen once a month as well, so they do smaller events and are basically wanting to get the youth involved in a little community,” Saviolakis added.

Alexander Mountakis is the Youth Committee President for the Cretan Association and has been working hard to bring the Easter spirit alive following the restrictions imposed during the COVD-19 pandemic last year.

“We don’t really do much for Easter, and I spoke with Terry as well, everyone likes to buy lambades so why don’t we try it out…. And it’s a good thing for the youth to get together and bond more as well,” Mountakis said to The Greek Herald.

Mountakis revealed that the Youth Committee is also planning to hold a taverna night in June to help bind the community closer.