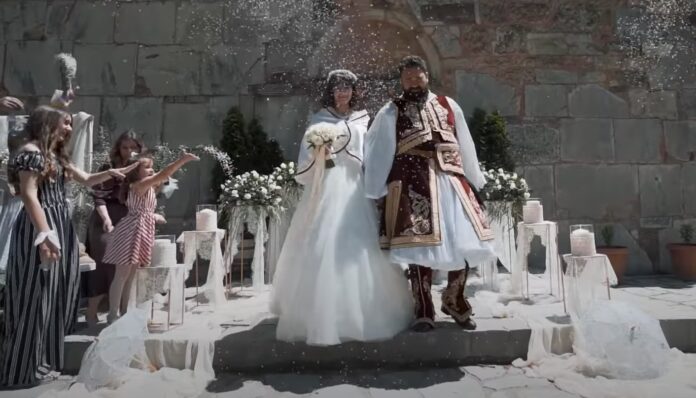 Apostolos Costarellos and his wife, Arianna, recently got married in the Byzantine Church of Porta Panagia, just outside Trikala. But their wedding wasn’t like any other seen in the last 200 years.

Instead of a simple wedding, the proud Greek couple hosted it in historical fashion, with all attendees dressed in attire from Greece’s War of Independence.

Not only dressing the part, however, the couple carried out all traditions and customs that took place in Greece during the early 19th century. The Greek Revolution theme was done to honour 200 years since the Greek War of Independence, where Greece successfully rose above the Ottomans to claim back their land.

The groom started from his village, Gorgogyri, armed and dressed in traditional costume and riding a horse. Following a long three hour walk through the forest to the church, he arrived with his brother, friends and best men Alkis Argyriou and Stefanos Polygenis.

There he welcomed his beautiful bride Arianna, originally from Russia, who arrived in a traditional 19th century carriage. It’s noted that this is the first time such a carriage appeared in Trikala.

Holding an intimate wedding with few guests, due to coronavirus restrictions, the elegant church complemented the couple’s intrinsically detailed attire and love for each other.

The wedding was filmed by ‘Up Stories’ and can be watched below: