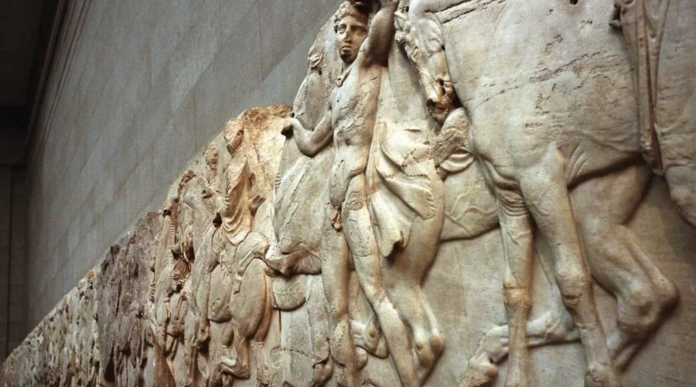 Brits have shared their fury at the European Union demanding the UK hands over the Elgin Marbles back to Greece as part of a trade deal between Britain and the bloc.

The EU’s chief negotiator Michel Barnier said the bloc was ready to offer an “ambitious partnership” with the UK post-Brexit.

“A trade agreement that includes in particular fishing and includes a level playing field, with a country that has a very particular proximity – a unique territorial and economic closeness – which is why it can’t be compared to Canada or South Korea or Japan.”

His comments came as an EU document showed his negotiating mandate would include “addressing issues relating to the return or restitution of unlawfully removed cultural objects to their countries of origin.”

A diplomatic source claimed this was a reference to the ancient Greek statues in the British Museum, known as the Parthenon marbles.

But many readers expressed their fury at the EU’s plot on Express.co.uk’s Facebook page.

Bob Wheeler said: “Keep the marbles, keep the fisheries. We have been very generous, we gave them their freedom twice.”

Meanwhile, Chris Allen called Mr Barnier a “dreamer”. “Not a chance, you can’t have the marbles. They’re British owned since 1816, really Mr Barnier, get real, you are a dreamer.”

The Parthenon marbles have been a controversial matter for more than 200 years.

Acropolis Museum in Athens, which has the remaining sculptures that were left in Greece, has even left an empty space in the hope of their return.

However, a government spokeswoman said the marbles would not be up for discussion during next month’s trade talks.

She said: “The EU are still finalising their mandate – this is currently in draft. The UK’s position on the Parthenon sculptures remains unchanged – they are legal responsibility of the British Museum. That is not up for discussion as part of our trade negotiations.”

Meanwhile the UK Telegraph recently posted an article with the title “The Elgin Marbles don’t ‘belong’ to Greece, they belong to us all”

With reference to Express.co.uk