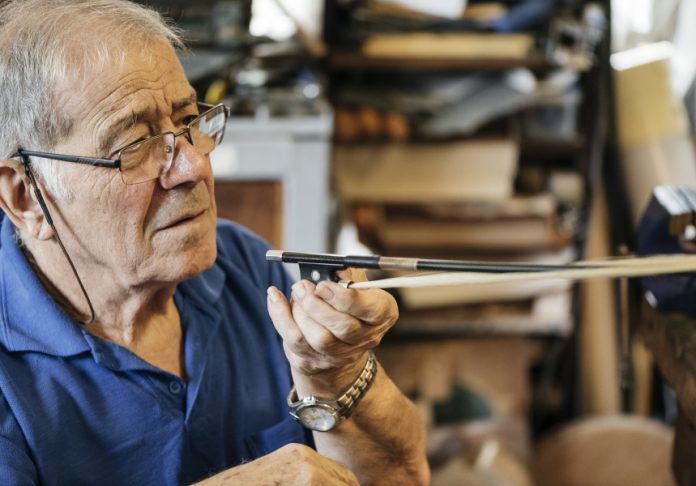 “When I was a young boy in Cyprus, I used to play the violin as the bride walked down the aisle,” Harry Vatiliotis tells The Greek Herald as he reminisces about the good old days. “I always liked the violin.”

Almost 66 years later and Harry’s passion for the violin has only grown stronger. The Cypriot Australian is now arguably Australia’s best regarded and most prolific luthier (someone who makes instruments with strings, a neck and sound box). He has singlehandedly made more than 780 violins, many of which are now played by leading musicians in Australia and internationally.

With all these accomplishments, it should have come as no surprise that Harry was recognised for his craft in the Queen’s Birthday Honours List for 2020. But according to the humble man himself, he really didn’t expect the recognition.

“When I found out I had become a Member of the Order (AM) I was overwhelmed and surprised. I didn’t expect it,” Harry says.

“A lot of my clients were really excited as well. Maybe even more so than me. A couple of them said: ‘it’s about time one of us got a gong’.”

It’s not surprising Harry’s clients were his biggest supporters. For years, Harry has worked continuously from his Concord workshop, ensuring his violins are handcrafted to perfection to meet the exact needs of those who pay for his services.

However, whilst he is happy to experiment with different oil and spirit varnishes if the client requests him to, Harry still favours the traditional methods of the Cremonese school of violin makers. This was a method he was introduced to when he first arrived in Australia from Cyprus in 1952 at the age of 15.

“I was born in the village of Vatili in Cyprus but when I was 15, my family and I came to Australia. My first job was at the Eveleigh railway workshops in Sydney, where one of my fellow workers told me that if I was serious about making violins, I should get an apprenticeship with A E Smith and Company. They were Australia’s leading violin makers and repairers back then,” Harry explains.

“I took his advice and it was a success. I joined the company in 1953 and a year later, I made my first violin.”

Harry remained with the violinery and learnt all the tricks of the trade until 1970, when he eventually decided it was time for him to mentor other aspiring luthiers. He did this by conducting Australia’s first (and only) stringed instrument-making course at the University of Sydney’s Art Workshop from 1981-84. Something Harry says brought him a lot of happiness.

“I’ve got no secrets. I’m happy to teach anyone and I think people got a lot of pleasure from my teaching. I really just want to pass on my skills to other people,” Harry says with a smile.

It’s clear that Harry has lived a happy and fulfilled life. So fulfilled in fact, that he says he will probably semi-retire this year and close the door on a lifetime of the violin craft.

“I wanted to keep going until 2023 and complete my 70 years in the trade, but I think I might semi-retire at 66 years instead. That’s still good! I won’t go cold turkey that’s for sure. I’ll still be in touch with the musical world in any way I can,” he exclaims.

A resounding promise that the Greek Australian community will definitely be relieved to hear.

Read this article in Greek in The Greek Herald‘s print edition on June 19.