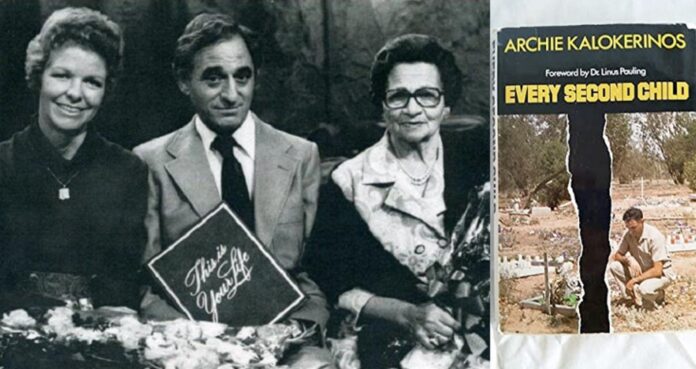 A book written by a Greek-Australian doctor in the 1970s has re-emerged as a pivotal text for Australia’s anti-vaccination movement.

The obituaries when Dr Archie Kalokerinos died in 2012 spoke glowingly of his service to Indigenous health. The Sydney Morning Herald credited him with cutting the infant mortality rate to zero in some regional NSW communities.

What wasn’t mentioned was Kalokerinos’ claims that vaccinations were a cause of vitamin C deficiency.

He was reported to have given speeches at events run by Australia’s longest running anti-vaccination group, the Australian Vaccination Network.

He spoke about how the World Health Organization and Save the Children Fund were deliberately committing genocide through a mass vaccination program, and how the US government was conspiring to kill certain populations by encouraging those with known heart problems to get vaccinated.

Every Second Child is long out of print. But that hasn’t stopped it from becoming a core text for today’s anti-vaccination campaigners. Copies of the paperback are listed for sale on Amazon at more than $900 for Australian buyers.

The Australian Vaccination Network (which has since been renamed) posted in February that the book was a reason that Indigenous Australians were wary of being vaccinated.

One website hosting the free download shows it has been downloaded more than 2400 times. Facebook posts by users, including prominent international anti-vaxxers, that link to this digital copy of the book have received nearly 5000 engagements.