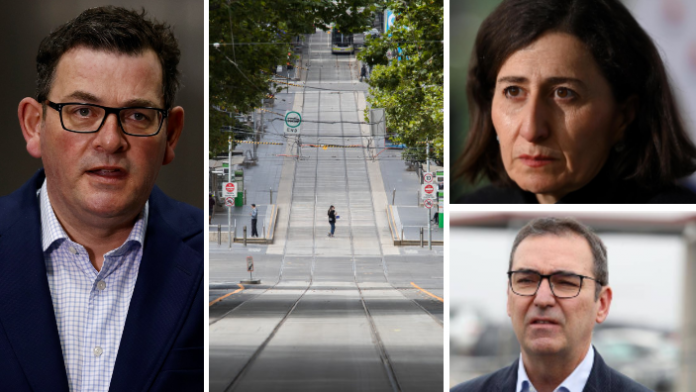 With New South Wales, Victoria and South Australia in the grips of separate COVID outbreaks, there’s sure to be a bit to watch today. Here’s all the latest information we know so far from those states.

Victoria’s lockdown has been extended by seven days as health authorities battle an outbreak of the Delta strain of COVID-19.

Of the new cases, 12 have been linked to the current outbreaks and one is under investigation.

There were 49,454 test results received yesterday, and 17,083 vaccine doses were administered at state-run sites.

The lockdown was initially scheduled to end at midnight Tuesday, but Premier Daniel Andrews announced this morning it would continue until midnight on July 27.

“We need to avoid what is going on in Sydney at the moment, and we are determined to do that,” he said.

South Australia will go into lockdown from 6:00pm tonight, after health authorities confirmed the state’s outbreak is the Delta strain. The lockdown will last for seven days.

They have so far identified five cases linked to the current cluster.

The fifth case was identified in a diner who went to The Greek on Halifax restaurant on Saturday night at the same time as a contact of the original case — a man who came back from Argentina earlier this month.

READ MORE: Gaganis Bros and The Greek on Halifax listed as exposure sites in SA as COVID cases grow.

“We hate putting these restrictions in place but we believe we have one chance to get this right,” Mr Marshall said.

A fourth case was announced earlier this morning, but Mr Marshall said the fifth case — not from among the original family —  was “far more worrying.”

“We have no alternative but to impose some fairly heavy and immediate restrictions to come in — at 6:00pm tonight South Australia moves into lockdown,” the Premier said.

From 6:00pm, the only reasons to leave home will be to care for someone, for essential work, to purchase essential goods such as food, exercise with people from the same household and healthcare — including COVID testing and vaccination.

Support for businesses is expected to be announced tomorrow.

Schools will be closed from tomorrow with a 24-hour transition period in place for teachers to arrange at-home learning.

Among the exposure sites is also Gaganis Bros in Hindmarsh from 1:00pm–2:30pm on Friday, July 16.

Late on Monday, Gaganis Bros announced on their Facebook page that they will be “closed until further notice” and they are “working closely with SA Health” to be able to reopen as soon as possible.

NSW recorded 78 new locally acquired cases of COVID-19 in the 24 hours to 8:00pm yesterday. 21 of those cases were infectious while in the community.

Premier, Gladys Berejiklian, said the number would have been “much higher if people weren’t doing the right thing.”

The Premier praised the south-west Sydney local government areas (LGA) of Fairfield, Liverpool and Canterbury-Bankstown — which are under enhanced lockdown orders — for their high rates of testing.

Chief health officer, Kerry Chant, said however, there was an emerging risk in the Canterbury-Bankstown region and asked residents there to minimise their contact with others.

Dr Chant said contact tracers were also finding unlinked cases all across Greater Sydney and were of “significant concern.”

More than 63,000 tests were conducted in the reporting period.